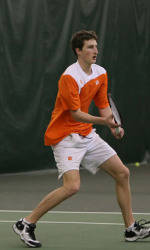 It was the season opener for all three teams. The Tigers are ranked 66th according to the latest Intercollegiate Tennis Association poll.

Derek DiFazio won at number one singles in both matches. He defeated Evgeny Slesarez of Gardner Webb 7-5, 6-4. In the second match, DiFazio defeated Eric Noble of Davidson 6-1, 6-4.

Kevin Galloway clinched the match for the Tigers as he won over Calum Gee of Davidson 7-5, 6-0 at number five singles. Clemson freshman Juan Bolona defeated Kevin Moore at number six singles 6-4, 6-4 to make the team score 5-2 in Clemson’s favor.

In the Gardner-Webb match, Clemson won all six singles matches and won the doubles point on the way to the 7-0 victory over the Runnin’ Bulldogs.

Overall in singles, DiFazio, Rok Bizjak, Galloway, and Bolona all won both of their singles matches against Gardner-Webb and Davidson.

“This was a great start to our season,” said Clemson Head Coach Chuck McCuen. “I was very anxious to start today and I think our team responded very well. As one of our players said, all of the hard work in the fall is paying off. I think that we are a very disciplined team, and we showed some mental toughness today. I was very proud of the way we played and this is a good start.”

“Overall I think we played well,” said Derek DiFazio. “I think we worked hard and played well this fall, and we carried this momentum over to today. We are happy with the start and getting the wins today. We will have to keep working hard.”

Clemson will play host to USC Upstate and Presbyterian on Saturday, February 6, in the Tigers’ next action.