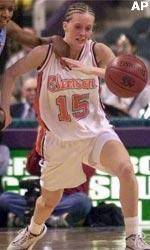 With the win, Clemson improves to 13-8 overall, 5-5 in the ACC. Florida State falls to 11-10 overall, 2-8 in league play. Glenney has scored 111 points in the last six games. Tonight, the senior forward was 5-11 from the field and 8-11 from three free throw line. She also finished with four rebounds, and three assists. Floyd was 7-14 from the field and 2-4 from thee three-point line. She also had four rebounds.

The Seminoles regained the lead 14-13 at the 8:50 mark as Katelyn Vujas hit a field goal. Both teams hit two field goals each and Florida State held the lead, 18-17 with 4:22 on the clock.

Clemson opened a 15-point lead at the start of the second half, 35-20 as the Lady Tigers scored the first 10 points of the second half behind Magie Slosser’s three-point play. Florida State first scored in the second half at the 15:10 mark with a field goal by Trinetta Moore underneath. Clemson had its largest lead of the game 39-22 with 14:15 left to go in the game.

From this point, Florida State went on a 11-0 run and cut Clemson’s lead to six, 39-33 with 8:20 left. The Lady Tigers did not score for 6:29. Laquinta Neely scored five points in this Seminole rally.

Chrissy Floyd scored a three point basket from the right with 7:46 left to extend the Lady Tigers’ lead to nine 42-33 with 7:46 remaining. The Lady Tigers maintained at least a seven-point lead for the remainder of the game.

“Before the game I emphasized to our team that we needed to outrebound, play great defense, and be patience on offense,” said Clemson Head Coach Jim Davis. “I think we did a great job in all three areas. We also executed well and I was proud of our team. Marcia Glenney continues to play well and Chrissy Floyd had another great game and hit a big three-point basket for us to end our scoring slump late in the second half.” Clemson will play host to Virginia on Thursday, February 7, at 7:00 p.m. in the Lady Tigers next action.