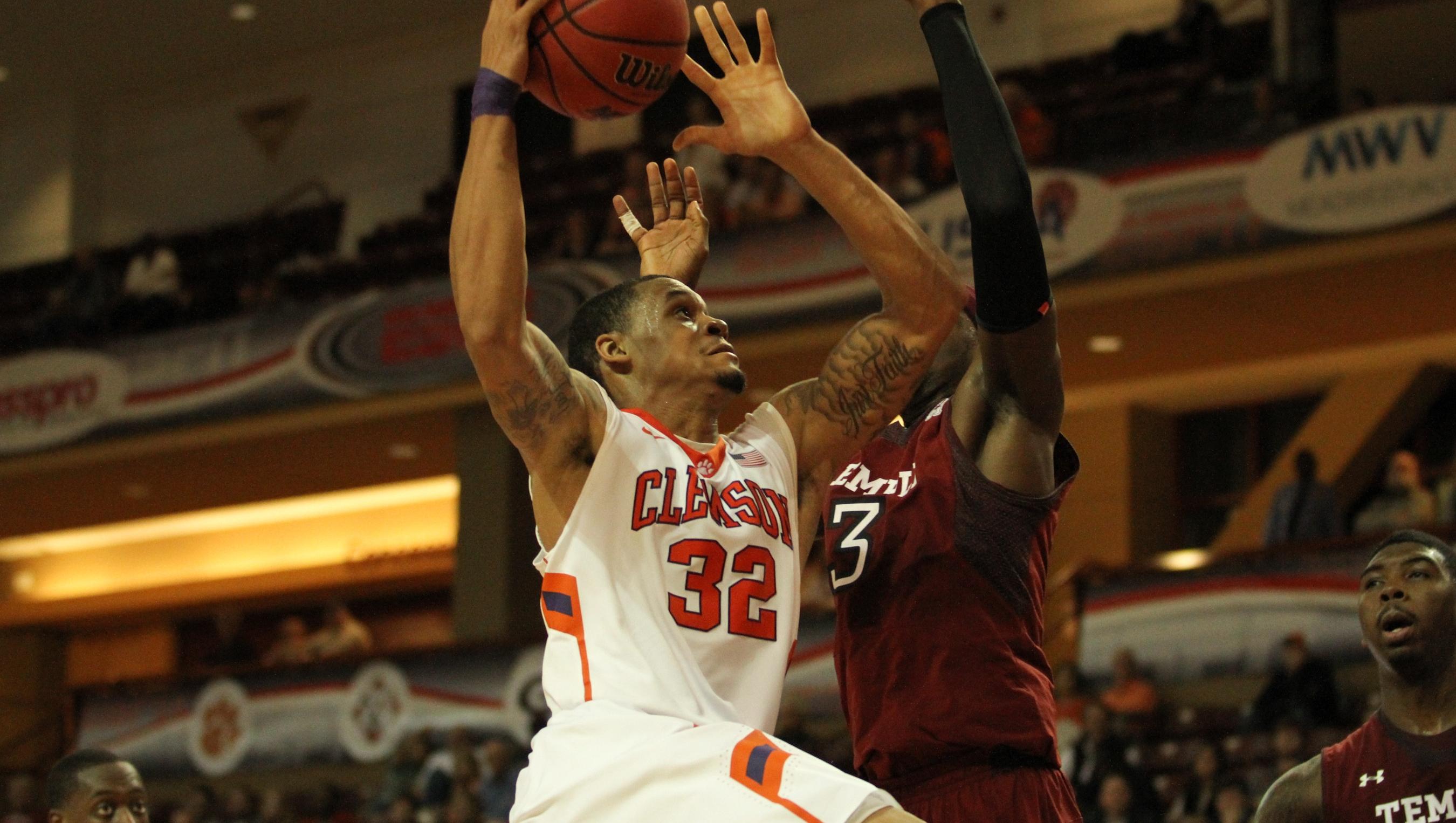 CHARLESTON, SC – K.J. McDaniels and Damarcus Harrison both scored career highs on a combined 16-19 shooting from the field  to lead Clemson to an 85-54 win over Davidson in the semifinal round of the Charleston Classic in Charleston, SC on Friday night. The victory brought Clemson to a 5-0 record, while Davidson fell to 1-4.

With the victory, Clemson advances to Sunday night’s championship game against the University of Massachusetts. The Minutemen upset 19th-ranked New Mexico earlier in the day at TD Arena 81-65. Clemson won the Charleston Classic in 2008 and the Tigers are now 5-0 in the event.

McDaniels led the way for Clemson with 22 points on 8-9 field goal shooting, including 3-4 on three-point shots. McDaniels has now scored at least 20 points in four of Clemson’s five games this year. He did not have a 20-point game in each of his first two years. The native of Birmingham, AL reached that career high in just 21 minutes,  the first time in his career he has had more points than minutes played.

Harrison scored his career high point total on 8-10 shooting from the field. His previous high was 19 against Virginia Tech last season. Rod Hall was the only other Tiger in double figures with 10 points, while Jaron Blossomgame, Austin Ajukwa and Jordan Roper all had seven points apiece. Blossomgame led the Tigers in rebounding with a career high nine.

Clemson had one of its most efficient games offensively since Brad Brownell became head coach of the Tigers. Clemson shot 61.1 percent from the field overall and hit 10-19 on three-point shots, 53 percent. Clemson’s field goal percentage was the best for a Clemson team since a 61.4 percentage against The Citadel earlier this year on New Year’s Day.

Chris Czerapowicz led Davidson with 14 points, while De’mon Brooks had 12 points in just 19 minutes. Brooks suffered an injury with 12 minutes left and did not return.

Clemson had another standpoint performance on defense and held Davidson to 54 points, 22 under its season average. The Tigers also limited Davidson to 6-21 shooting on three-point shots. Davidson shot just 2-11 from the line.

Clemson held a 43-33 lead at intermission behind McDaniels, who was a perfect 7-7 from the field in the opening 20 minutes and scored 19 points. It was the most points in a half for McDaniels, who had never scored more than 17 points in a game prior to this year.

As a team, Clemson shot 17-23 from the field in the opening half. The Tigers made eight of their first 11 shots from the field and scored 26 points in the game’s first 10 minutes.

Clemson increased the 10-point halftime lead to 16 in the first three minutes of the second half with an 8-2 run. Clemson continued to steadily increase the lead in the second half and led by as many as 36 points at one point.

“I was proud of our guys tonight,” said Brownell, who has the Tigers 5-0 for the first time since he became head coach four years ago. Clemson is one of four remaining undefeated teams in the ACC.

“When we shoot the ball that well, good things are going to happen. We also paid attention to detail tonight. We did a good job of following the scouting report defensively, which is important against Davidson. They are a hard team to guard because they can hit the three in a hurry.

“Damarcus Harrison played great. It is so good to see him play with confidence. When he hits his shot early it is important. We need guys who can score the basketball.”

Brownell was enthused by his team’s discipline.

“We played with great discipline in all areas tonight and that was the key.”