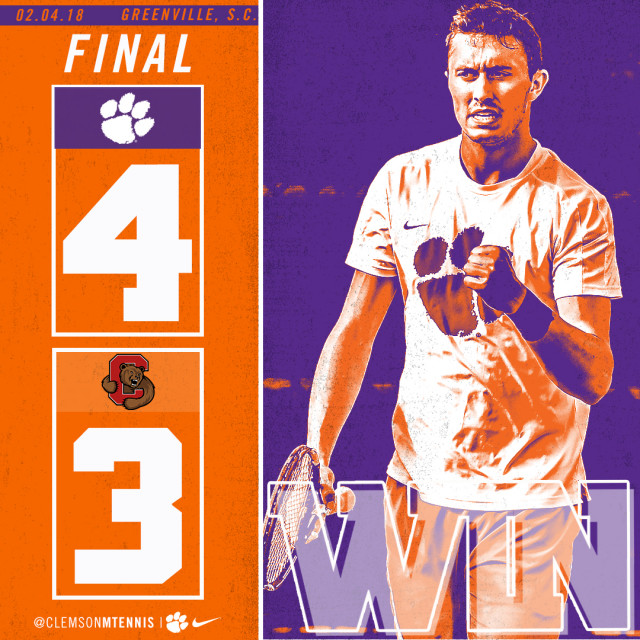 GREENVILLE, S.C. – Senior Alex Favrot and sophomore Simon Baudry clinched the first win over Cornell as the Tigers defeated the Big Red 4-3 on Sunday afternoon at the Mickel Tennis Center in Greenville, S.C. With the win, the Tigers improve to 4-1 on the season while the Big Red drops to 1-2.

Cornell got out to a fast start in doubles taking a 6-1 at No. 3. Sam Edwardsand Yizhou Liu remain undefeated in the No. 2 slot as they won 6-2. Favrot and Baudry clinched the match with a (6-4) win at No. 1.

Up Next
The Tigers are back in action Friday, Feb. 9 as they host Georgia State at the Anderson Tennis Facility in Anderson, S.C. The match was originally scheduled to start at 5 p.m. but has been moved to a 2 p.m. start.

Head Coach John Boetsch Quotes
“Cornell is a tough, well coached team. During the nearly five-hour battle today we took a lot of punches. I am proud of our guys for throwing the last punch. Our team was fired up for the match and it showed in how we played and the energy that everyone brought to the table. Game balls go to Alex and Sam. Alex was solid all day and he and Simon were clutch at the end to give us the doubles win. Sam got the best singles win of his college career and will gain a lot of confidence from today. He was scary good in doubles as well versus one of the best freshman in the country. I am proud of the whole group for the work they put in this week and am excited about getting back to work in preparation for Georgia State.”