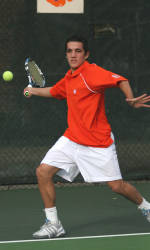 MIAMI, FL–Carlos Alvarez defeated Johan Beigart at number one singles 4-6, 6-2, 6-4 in clinching the match and giving Clemson a 4-3 win over Central Florida in a men’s intercollegiate tennis match at Miami, FL Friday.

With the win, Clemson improves to 3-2 overall, while Central Florida falls to 3-3 this season.

The Tigers won the doubles point as Gera Boryachinskiy and Rok Bizjak won at number one doubles with a win over Mark Rocafort and Blaze Schwartz 8-6. Ike Belk and Kevin Galloway of Clemson also won at number three doubles with an 8-3 victory over Tarek Ben Soltane and Eugene Dolgovykh 8-3.

In singles, the Knight’s Soltane defeated Bizjak at number two singles 6-2, 6-1. Central Florida’s Rocafort defeated Galloway at number four singles 6-3, 6-4 as the Knights took a 2-1 lead in the match.

Schwartz of Central Florida defeated Boryachinskiy at number three singles 2-6, 7-5, 6-3 to tie the match score once again 3-3 setting up the number one singles flight as the deciding match.

Alvarez won his third dual match of the season and his first at number one singles with his victory over Beigart.

Clemson will play at ACC-foe Miami Saturday at 2:00 p.m. in the Tigers’ next action

Miami has a 2-2 record this season and this will mark the first ACC contest for the Hurricanes. Miami is ranked 23rd in this week’s ITA poll, and Clemson is ranked 63rd.

This will be the 46th meeting between Clemson and Miami in men’s tennis. Miami leads the series 23-22. The series began in 1968.

“This was an intense match for us today,” said Clemson Head Coach Carlos Alvarez played great tennis today and he simply refused to loose his match. This was a good win for our team and I felt we grew a lot today.”

The 2009 season marks the 100th year of men’s tennis at Tigertown. Clemson first sponsored men’s tennis in 1910 when two Tiger tennis players entered the annual state tournament. The first dual match was played in the 1921 season as the Tigers defeated Wofford 2-0 on April 28 that season, in Spartanburg, SC.

Also the 2009 season is the first year for Clemson Head Coach Chuck McCuen. McCuen has been an assistant at Clemson for the past six years. He is only the seventh head Coach in the history of the program.