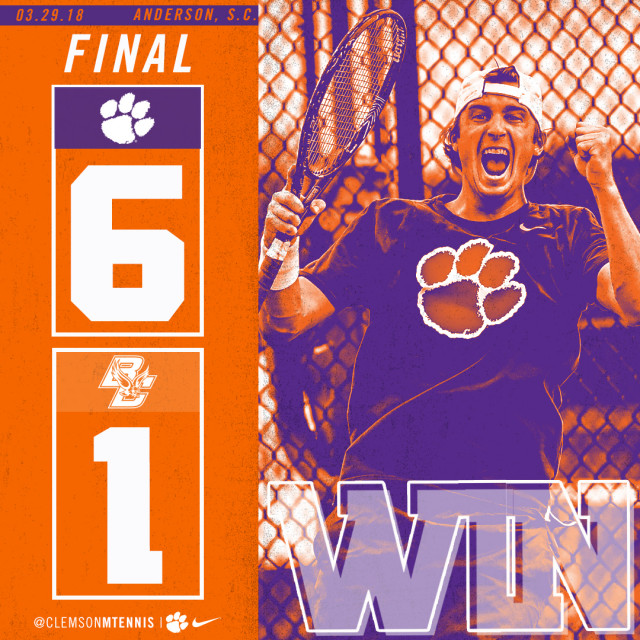 Clemson took care of business in doubles with victories on courts one and three to clinch the doubles point. The French duo of Alex Favrot and Simon Baudry were the first to finish, defeating Austin and S. Mullins, 6-2. The Eagles took a 6-3 win at No. 2, putting the pressure on court 3 to clinch the doubles point. Carlos Kelaidis and Marshall Dagostine came through strong for Clemson, clinching the point with a 6-4 victory.

Clemson carried the momentum into singles. Liu picked up his seventh win of the season, defeating BC’s Norby 6-1, 6-2 to give Clemson a 2-0 lead. The Eagles would cut the lead in half after picking up a match point at No. 6.

Seniors Favrot and Sam Edwards won almost simultaneously. The Lyon, France native was the first picking up a win at No. 1 with set scores of 6-3, 6-4. Edwards was not far behind when he clinched the match with a 6-2, 6-4 victory at No. 3.

– Yizhou Liu picked up his third consecutive win to improve to 7-4 on the season.

– Kelaidis and Dagostine improve to 7-4, while picking up their second consecutive win.

– Second consecutive season that Clemson has defeated Boston College by a score of 6-1.

– Clemson leads the all-time series 16-1 over the Eagles.

The Tigers will return to action Saturday, Mar. 31 as they host Virginia Tech at the AU Tennis Complex. The match is set for a 1 p.m. start.