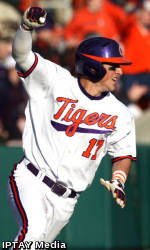 CLEMSON, SC – With Clemson’s 6-5 baseball win over South Carolina on Sunday, the Tigers have now defeated the defending National Champion in each of the three major men’s sports in games held at Clemson four consecutive times. The streak dates to January of 2010.

The streak started on January 13, 2010 when the Tigers defeated defending NCAA Basketball Champion North Carolina by an 83-64 score at Littlejohn Coliseum. That was North Carolina’s worst margin of defeat in an ACC game in seven years at the time of the game.

The Clemson football team joined the streak this past September 17 when the Tigers defeated defending champion Auburn, 38-24. That brought Clemson’s all-time record against the defending national champion in Death Valley to 3-0. Clemson has also downed defending champions from Georgia (1981) and Georgia Tech (1991).

Clemson made it four straight against defending national champions in the three major sports with the Tigers’ 6-5 victory over South Carolina on Sunday. Steve Wilkerson’s lined drive single in the bottom of the ninth gave the Tigers the victory.

Not included in the list is a victory over the nation’s number-one team in men’s soccer this year. Clemson defeated number-one ranked Maryland at Clemson by a 2-1 score on October 28, 2011.