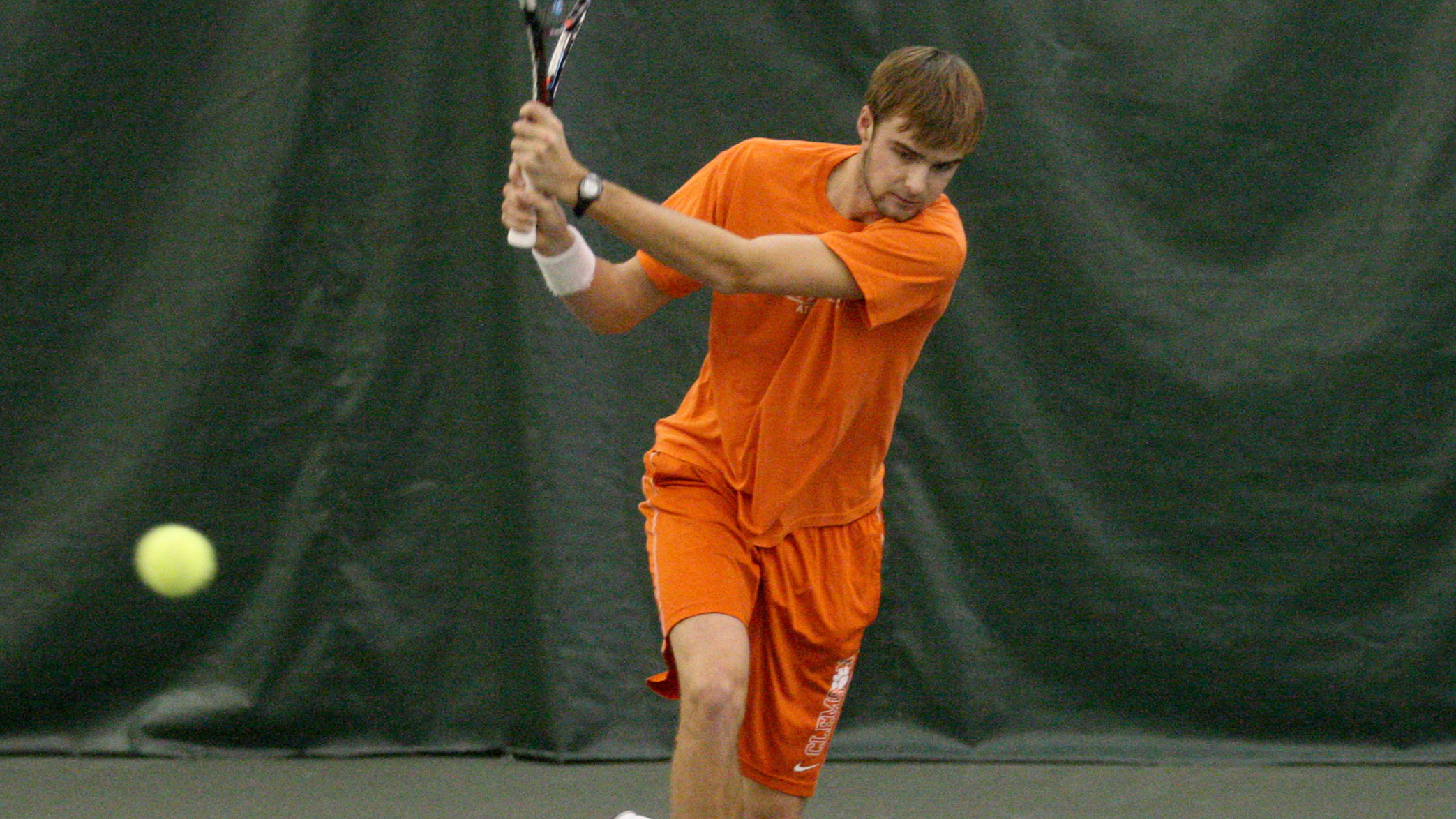 CLEMSON, SC – Clemson won its eighth match of the year in defeating #35 Louisville 4-0 in a men’s intercollegiate tennis match at Clemson, SC Sunday afternoon.  The match was played indoors due to windy and cool conditions.Clemson, ranked 57th nationally, improves to 8-1 overall this season.  This is the second straight match that the Tigers have defeated a higher ranked opponent.  Clemson defeated #45 Alabama Friday afternoon.  Louisville, ranked #35 nationally, falls to 7-6 this season.Clemson won the doubles point and took an early 1-0 lead.  The Tigers’ Yannick Maden defeated Sebastian Stiefelmeyer at number-one singles 6-1, 6-2 to give Clemson a 1-0 lead in a match of ranked players.  Maden is 13-4 overall in singles, and has a 7-1 mark at number-one singles.  Maden is ranked 83rd and Stiefelmeyer is ranked #115 nationally.Ayrton Wibowo was a 6-4, 6-3 winner over the Cardinals’ Austin Siegel at number-four singles to give the Tigers a 3-0 advantage.  With the victory, Wibowo won his eighth match of the season.Clemson’s Hunter Harrington clinched the match for the Tigers as he defeated Chris Simich 3-6, 6-1, 6-4 at number-two singles.  Harrington is 9-4 overall in singles this year and has a 5-1 mark in dual match play.”I’m happy to get the win over a very good Louisville team,” said Clemson Head Coach Chuck McCuen.  “Louisville is a top-25 program traditionally, and is a well-coached team.”Today’s win was big for us in that we are learning how to win.  We are learning how to fight and stay in points longer.  Harrington staying in his match and coming away with a win, that is an example of perseverance.  Wibowo lost a close match against Alabama on Friday and today he played well and had a good win, that again is learning perserverance.  This is what we have been emphasizing this year and that is to never give up and keep working hard.”I am proud of our guys,” said McCuen.  “We are going to continue to work and improve.”Clemson will play at Auburn on Friday, March 22, in the Tigers’ next action.     Clemson 4, Louisville 0Singles1. #83 Yannick Maden (CU) d. #115 Sebastian Stiefelmeyer (L) 6-1, 6-22. Hunter Harrington (CU) d. Chris Simich (L) 3-6, 6-1, 6-43. Gerardo Meza (CU) vs. Albert Wagner (L) Unfinished4. Ayrton Wibowo (CU) d. Austin Siegel  (L) 6-4, 6-35. Zachary Rigsby (CU) vs. Alex Gornet (L) Unfinished6. Austin Ansari (CU) vs. Luis Elizondo (L) UnfinishedOrder of Finish: 1, 4, 2Doubles1. Y. Maden/Rigsby (CU) vs. #31 Wagner/Gornet (L) Unfinished2. Wibowo/Ansari (CU) d. Stiefelmeyer/Derognat (L) 8-63. Harrington/Meza (CU) d. Luis Elizondo/Siegel (L) 8-2Order of Finish:  3, 2