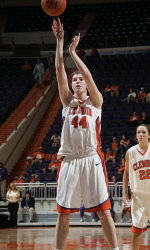 CLEMSON, SC – Clemson senior Amanda Frist had a season high 15 points, but she was unable to lead her team to victory as the Lady Tigers fell to in-state rival South Carolina, 77-46, on Monday night.

The loss dropped Clemson to 6-8 on the year, while the Gamecocks won their seventh straight game to improve to 9-3.

South Carolina did not allow the Lady Tigers to score in the first 6:14 of the opening half. Tasha Taylor hit a jumper for Clemson’s first basket of the period before South Carolina’s Lakesha Tolliver put her team up by 12 at 14-2. The Lady Tigers were within nine points at 18-9, but the Gamecocks outscored Clemson 15-11 in the remaining 7:56 and took a 33-20 advantage into the halftime break.

South Carolina dominated the second half, scoring 44 points in the period. The Gamecocks went on a 20-4 run from the 11:57 mark until Phillips hit a jumper at 6:10. Frist had 11 points in the half, including two baskets off the glass in an attempt to inspire the team. However, South Carolina went on to claim the 77-46 victory.

The Lady Tigers will open their ACC season in Chapel Hill, NC on Friday, Jan. 6 against the North Carolina Tar Heels. Play is scheduled for 7:00 PM.