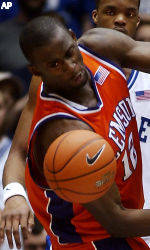 DURHAM, N.C. – J.J. Redick had 20 of his 24 points in the second half and role player Lee Melchionni made two clutch 3-pointers, helping No. 6 Duke rally past Clemson 62-54 Sunday night in the Atlantic Coast Conference opener for both teams.

Shelden Williams finished with 13 points and 16 rebounds for the Blue Devils (9-0), who won their 18th straight over the Tigers. The previous victories were by an average margin of 17 points, but this one was close throughout, mostly because of the absence of Duke forwards Shavlik Randolph and Reggie Love.

Randolph is out indefinitely with mononucleosis, and his replacement, Love, left in the first half with an undisclosed foot injury. That left the Blue Devils dangerously thin up front, and the Tigers (9-4) took advantage.

Clemson took the lead on a layup by James Mays, and Akin Akingbala then went 3-of-4 from the free throw line over the next minute to make it 38-35 midway through the second half.

A basket by Williams cut the deficit to one, then Melchionni swished a 3 to give Duke the lead for good. Redick hit a 3 to start a personal run of 12 points in about 3 minutes, which included another 3-pointer, a putback and a nice layup in traffic.

That put Duke ahead 55-45 with about 5{ minutes left, and Clemson got no closer than six points the rest of the way.

Before Redick and Melchionni got going, the Blue Devils struggled from beyond the arc. They failed to make one in the opening 20 minutes to put their streak of 525 straight games with at least one 3 in jeopardy.

Redick finally extended that run with his first of four 3s barely 3 minutes after halftime.

Of course, Duke wasn’t the only team struggling in the opening half. The Tigers shot only 31 percent and made 16 turnovers, part of an ugly display that left the Blue Devils in front 24-19 at halftime.

Duke went about 8 minutes without a basket, and Clemson had its own 6-minute drought. Redick missed his first four shots – two were blocked – and finished with only four points in the first half.