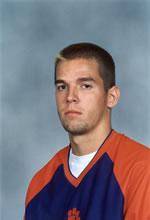 The Clemson men’s track and field team returns to action on Mar. 26-27 at the Raleigh Relays.