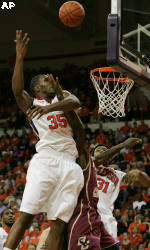 CLEMSON, S.C. (AP) –Trevor Booker scored 19 points and Clemson bounced back from a loss at Duke to win its first Atlantic Coast Conference game this season, 72-56, over Boston College on Saturday.

The Tigers (13-3, 1-1) played an awful game at Cameron Indoor Stadium last Sunday night, netting just 12 points at halftime and falling from the rankings after a 74-53 defeat.

Clemson discovered its shooting touch – the Tigers hit nearly 60 percent of their shots in the opening half – to win its fourth straight against the Eagles (10-6, 1-1), who have lost two of their past three.