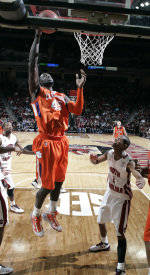 The Tigers (9-4) won their fourth straight game. Jay Threatt and Desi Washington paced the Hornets (4-7), who lost their fourth in a row, with eight points each.

Leading by 21 points at halftime, the Tigers scored the first seven points of the second half and led by 36 points late in the game.