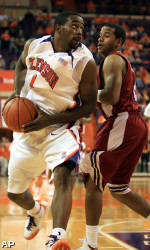 The win marked the fourth straight season the Tigers (10-0)won their first 10 games.

Clemson led by 24 points at halftime and by many as 30 in the second half.

Led by Oglesby and Rivers, the Tigers pulled out to a 47-23 halftime advantage.