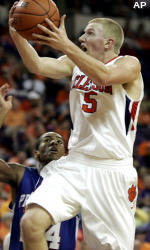 CLEMSON, S.C. (AP) – With No. 24 Clemson’s two best outside shooters gone from a year ago, coach Oliver Purnell wasn’t sure who’d fill that long-range void.

Welcome to the show, Noel Johnson.

The Tigers’ 6-foot-6 freshman had four of Clemson’s 14 3-pointers in an 84-41 victory over Presbyterian College on Friday night.

While some first-year performers might be nervous in their first game in front of a large crowd – there were nearly 9,200 at Littlejohn Coliseum – Johnson was silky smooth.

Noel Johnson showed that polish right away. The former Southern Cal signee got things going with three straight first-half 3s for an 18-4 lead from which the Blue Hose couldn’t recover.

Johnson finished with 12 points, and David Potter, Andre Young and Bryan Narcisse each hit a pair of 3-pointers. Even big Trevor Booker, the Tigers’ 6-foot-7 force in the middle, got into the act by rattling home an off-balance heave from the deep right corner.

It was too much for Presbyterian, which is in just its third season of Division I basketball. Zach Faircloth led the Blue Hose with 14 points.

Outside shooting was a big question for this year’s Tigers. K.C. Rivers and Terrence Oglesby made more than 60 percent of Clemson’s 256 3-pointers last season.

But Rivers graduated and Oglesby passed up his final two years for a pro career overseas. Few of the returnees had reliable outside strokes.

Then Johnson came along. The guard from Fayetteville, Ga., had signed with Southern Cal and Tim Floyd last fall, but Johnson began to doubt his choice when he heard Floyd spoke with Arizona about its basketball vacancy. Allegations of improper recruiting of former Trojans star O.J. Mayo sealed Johnson’s decision to look elsewhere.

He got his release and landed at Clemson in late June, where he’s quickly become option No. 1 from the outside. Johnson had three 3-pointers in an exhibition win over Francis Marion last Friday night and showed no hesitation to put it up early against the Blue Hose.

After the third straight 3, Johnson showed he could pass as well, with a nifty feed to Booker for an easy bucket.

Johnson had some outside help, too, as eight Tigers scored from long range – the most since 1982-83 at Virginia, when the distance was a more modest 17 feet, 9 inches.

Lost in the outside game was Booker, the Tigers star who led the Atlantic Coast Conference in field goal percentage and rebounding last season.

Clemson coach Oliver Purnell saw that his team had gotten a little “too 3 happy.” He ordered that the ball must touch a player in the post before someone shoots a three.

That worked for the Tigers, too, who hit eight second-half baskets from behind the arc.

“I don’t know that our guys necessarily have the range of some guys we had last year. But most of our threes are up against that line,” Purnell said. “And until they move it back, we’ve got some guys that can make that shot.”

Booker, honored before the game for his play on Team USA at the World University Games, mostly watched the shots fall. He finally had a crowd-pleasing jam to start the second half and finished 3 of 9 for 11 points. He added eight rebounds and two blocks.

Not that Clemson needed Booker’s crushing inside game.

The Blue Hose, who shot under 36 percent, had trouble simply getting it past midcourt against Clemson’s pressure and had 15 of their 27 turnovers in the first half.

Things will probably get worse for Presbyterian next month. The Blue Hose face an 18-day stretch of December road games at North Carolina, Ohio State, Dayton, Marquette and Florida.

Nibert says he red-shirted three junior starters from last year so they’d be eligible in 2011-12, the team’s first opportunity to win the Big South Conference tournament and the possible NCAA bid that comes with it.