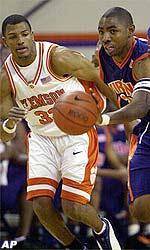 CLEMSON, S.C. – Roger Mason was upset about Virginia’s second-straight loss after a 9-0 start. But something else bothered him even more.

“I told the team that this is not the worst it can get for us,” Mason said after the seventh-ranked Cavaliers lost 68-52 to Clemson on Tuesday night.

“It’s bad right now and we feel terrible,” Mason said. “But there’s a long way ahead. I just told everybody they have to look in the mirror. Changes.”

Those changes will need to come before the Cavaliers (9-2, 0-2 ACC) go to North Carolina on Saturday.

Virginia rose as high as No. 4 in the rankings with nine straight victories. But the Cavaliers were beaten at home by North Carolina State 81-74 last Saturday and had their worst shooting performance of the season, going 22-of-61 (36.1 percent).

Mason led the way with 19 points and 12 rebounds. Travis Watson, the team’s high scorer the past three games, was held to six points. Chris Williams, averaging nearly 16 points a game, missed all seven shots and did not score.

The Cavaliers were 2-of-24 on 3-pointers and held to their lowest point total of the season, more than 30 points below their 84.8 point average coming in.

“Maybe we think we’re a little bit better than we are,” Virginia coach Pete Gillen said.

Or maybe Clemson is better than people thought.

The Tigers (11-5, 2-1) had lost to Winthrop and Yale the past two weeks at Littlejohn Coliseum. But Jamar McKnight scored a career-high 25 points and Edward Scott added 17 to end a four-game losing streak against Virginia.

McKnight and Scott led a 23-7 second-half run that put things away.

“We took those teams lightly,” McKnight said of Winthrop and Yale. “We knew if we could play together we could do better things.”

Typically, the Clemson fans chanted “Overrated! Overrated!” as the Tigers controlled things down the stretch.

When it was over, Clemson fans rushed the court as they did last February when the Tigers upset then-No. 1 North Carolina 75-65. Tomas Nagys dumped a water bottle on coach Larry Shyatt’s head to celebrate the Tigers’ win.

“We have separated ourselves the last two games by making shots,” Shyatt said. The Tigers followed a 10-of-34 opening half by going 16-of-30 after the break.

Many of those came from Scott, who was 0-of-9 in the 68-65 loss to Yale a week ago. But Scott smoothly led the Tigers.

“Against Yale, I just didn’t do my job,” Scott said. “But at the same time, nobody ever panicked me about my shooting. They let me go and play out of it.”

Scott was 7-of-13 overall and made three of his four 3-pointers.

Virginia was cold in this one from the start. The Cavaliers shot only 35.7 percent (10-of-28) and missed nine of their 10 3-point attempts in the first half. Watson did not start because of leg cramps he sustained against the Wolfpack. When he did get in with four minutes gone in the half, Watson quickly got two fouls and spent the rest of the period on the bench with a free throw and one rebound.

Mason knows things have got to change. The junior wants his team to work harder at practice and take opponents more seriously than they have the past week.

“When you don’t play defense and don’t hit shots and you go on the road in the ACC, you lose,” Mason said.