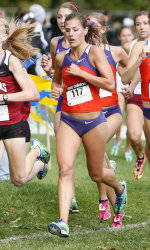 MADISON, WI – The Clemson cross country teams traveled to the Midwest for one of the toughest meets of the 2011 season, the Wisconsin adidas Invitational. The Tiger women came home with a 24th-place showing out of 44 teams, while the men were 39th at Wisconsin’s Zimmer Championship Course. Clemson, ranked 30th in the latest coaches poll, was able to finish one spot ahead of No. 28 Princeton.

The Tigers had an average time of 21:25 over the 6K course on Friday and just a 27 second split between their first and fifth place runners. Alyssa Kulik led the team for a third straight meet in scoring. The senior from Simpsonville, SC crossed the finish line in 76th place after posting a time of 21:11. She finished two seconds ahead of fellow Upstate native Kate Borowicz, who was 88th overall. This was the second straight meet for the Tigers in which Borowicz was the team’s No. 2 runner.

Natalie Anthony continued her solid season with a 124th-place effort overall. She had a time of 21:30 and was one second ahead of senior Kim Ruck, who was officially listed 128th place. The team’s fifth and final scorer on the afternoon was red-shirt sophomore Elyse Borisko. The native of Maryland was 143rd with a 6K time of 21:38. The non-scorers for the Tigers on Friday were Cara Talty (21:54) and Alyssa Henshaw (22:20).

The men’s team struggled to its most disappointing result of the season. Sophomore Ty McCormack, who had been a top-35 finisher in his previous two appearances this fall, struggled to place 209th overall. The other scorers on the afternoon for Clemson were Jonathan Sunde, James Dwyer, Aaron Ramirez and Scott Stanley.

Clemson returns to action in two weeks, as the Tigers play host to the ACC Cross Country Championships on Saturday, Oct. 29 at Musser Farms.