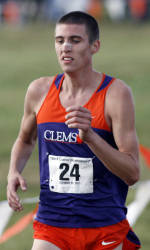 CLEMSON, SC – Clemson will take its two cross country teams to Louisville, KY to compete at the NCAA Southeast Regionals at E.P. “Tom” Sawyer Park on Saturday, November 12. It will be the third straight year the Southeast Regional meet will be held in Louisville. The men’s 10K is scheduled for 10:00 AM, followed by the women’s 6K at 11:15.

The women’s team is ranked No. 4 in the Southeast Region by the coaches. NC State is the top ranked team in the region, followed by Virginia and North Carolina. The Tigers are one spot ahead of UNC Greensboro in the regional poll. The top two teams automatically advance out of each of the nine regions. The 13 at-large teams chosen for the NCAA Championships field will be announced no later than 7:00 PM on Sunday, Nov. 13.

Clemson’s women are coming off a sixth-place showing at the ACC Championships, the program’s best in 12 years. Kulik has been the team’s best performer, finishing atop the team standings each of the last four meets. She was 24th at the ACC Championships on Oct. 31. Kulik was an all-region performer last fall after finishing 25th, along with classmate Ruck, who was sixth place.

McCormack was an All-ACC performer two weeks ago at the Tigers’ Musser Farms course. He led much of the men’s 8,000-meter race and finished in eighth place, becoming Clemson’s first all-conference men’s runner since Matt Clark in 2007. McCormack has a strong chance at earning an at-large bid to the NCAA Championships this weekend. The top 25 individual runners will be awarded all-region honors.