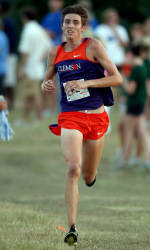 CLEMSON, SC – Clemson’s cross country teams will return to action Friday to compete at the Charlotte Invitational. The meet will be held at McAlpine Park and consist of a 5K women’s race at 4:00 PM and 8K men’s race at 4:30. Live scoring will be available online at FlashResults.com.

Twenty-four schools will make their way to Charlotte for the meet on Friday. Multiple teams ranked in the latest regional polls by the U.S. Track & Field and Cross Country Coaches Association (USTFCCCA) will be in action, including Clemson’s women who are ranked No. 5 in the Southeast Region. In the women’s race, Charlotte (No. 9 Southeast), Wake Forest (No. 10 Southeast), South Carolina (No. 14 Southeast) and Virginia Tech (No. 15 Southeast) are scheduled to compete. In the men’s 8K, the Hokies are No. 9 in the Southeast Region while Davidson comes in with a No. 11 ranking.

The Tiger program is coming off a successful home meet two weeks ago, when the women claimed the team championship at the Clemson Invitational. Individually, junior Kim Ruck took home the top honor with a personal best 5K time of 16:47.09. Ruck was named ACC Co-Performer-of-the-Week for her efforts. Ruck is the defending individual champion of the Charlotte Invitational.

Several veterans made their season debuts at the Clemson Invitational. Alyssa Kulik ran a strong 5K time and finished in third place, while senior Stephanie Buffo came across the finish line in the fifth position. Jenna Baker also made her debut, which was a great moment for the Ohio native who was forced to sit out the entire 2009 season. Baker will not travel with the team this weekend, however. She is slated to return to action at the Pre-NCAA Championships in Terre Haute, IN.

Clemson will welcome the addition of USC Beaufort transfer Nic Tones this weekend. Tones has been one of the team’s top runners in practice, but had not been cleared to compete until this weekend. He is a native of Bluffton, SC and should be in the mix for a scoring spot on Friday.