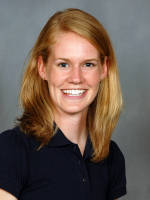 Clemmons, NC – The Clemson cross country teams concluded the 2008 season on Saturday at the NCAA Southeast Region Championships at Tanglewood Park in Clemmons, NC. Jenna Baker had an All-Region performance to lead the women’s team to a 10th-place finish, while the men’s team put together a 10th-place effort as well.

The 10th-place finish for the women’s team was the school’s best since 1999 when Clemson posted a ninth-place finish at regionals. For the men, it marks the eighth straight season with a top-10 finish. William & Mary won the men’s competition with 66 points, edging ACC team Virginia by a mere one point in the team race. On the women’s side, the Cavaliers made up for the men’s loss by claiming victory.

Baker became the first women’s cross country runner from Clemson to earn All-Region honors since Beth Ahern in 1998. Baker also was an All-ACC performer this season for the women’s squad, another first for the women’s program in the last 10 years. The Bellevue, OH native posted a solid 6K time of 21:27.0 on Saturday. It was an improvement of 20 positions from a year ago, when Baker was 35th at the Southeast Regionals as a freshman.

The #2 scorer for the women’s team Saturday was junior Laura Laughlin, one of the key veterans for Clemson. She had a time of 22:17.1 over the 6000m course. Joanie Castagno capped off a vastly improved season with a 61st-place finish at regionals, posting a time of 22:25.4. Finishing one position behind her was freshman walk-on Kim Ruck, who crossed the finish line with a time of 22:25.9. The fifth and final scorer for Clemson’s women was Stephanie Buffo, the 81st-place finisher at 22:46.7.

The top men’s finisher for Clemson this weekend was senior captain Sam Bryfczynski, who rebounded from a tough outing at the ACC Championships to finish 35th for the second year in a row at regionals. Bryfczynski posted a time of 31:41.8 over the 10,000m distance.

The second-best finisher for the men’s team Saturday was Jonathan Sunde, who finished 44th after crossing the finish line with a time of 32:02.7. It was easily a personal best 10K effort for the sophomore from Charlotte, NC.

Will Noble and Chris Slate finished together at 64th and 65th place, respectively. Noble, a co-captain alongside Bryfczynski, posted a time of 32:32.2, while Slate came across with a time of 32:35.3. The final scorer on the afternoon for the Tigers was sophomore Chad Holt, who had a time of 32:56.6.