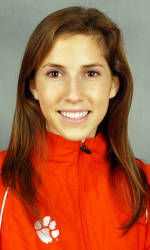 Greensboro, NC – The Atlantic Coast Conference announced the Academic All-Conference teams for both men’s and women’s cross country on Wednesday. Clemson placed two student-athletes on both teams – Jenna Baker and Kim Ruck for the women, Sam Bryfczynski and Jonathan Sunde on the men’s side.

It marked the third career Academic All-ACC honor in cross country for Bryfczynski, who earned his bachelor’s degree in computer science in May of 2008. Also a CoSIDA Academic All-District selection last spring, he was the top performer on the men’s team for much of the 2008 fall season. He led the team at the NCAA Southeast Regionals with a 35th-place finish and was the team’s top finisher at three straight meets in the middle portion of the season. Bryfczynski was Academic All-ACC for the 2006 and 2007 cross country seasons.

Sunde, a native of Charlotte, NC, earned his first-ever Academic All-ACC recognition. A sophomore majoring in mechanical engineering, Sunde earned a varsity letter this season after scoring high among Clemson’s team at both the ACC Championships and Southeast Regionals. He scored in all but one meet for Clemson last fall.

On the women’s side, Jenna Baker earned the honor for the second time in her young but decorated career. The sophomore nursing major was All-ACC on and off the cross country course in the fall. Baker placed 13th at the league meet on November 1 to earn Clemson’s first All-ACC honor in women’s cross country since 1998. She then finished 12th at the Southeast Regionals, also the first All-Region honor for the women’s program in over a decade.

Kim Ruck concluded her freshman year as the top surprise in possibly the entire ACC in women’s cross country. A walk-on who was an All-State soccer player in high school, Ruck was 20th at the ACC Championships, one of the top performances at the meet for a first-year athlete. She is majoring in health science.