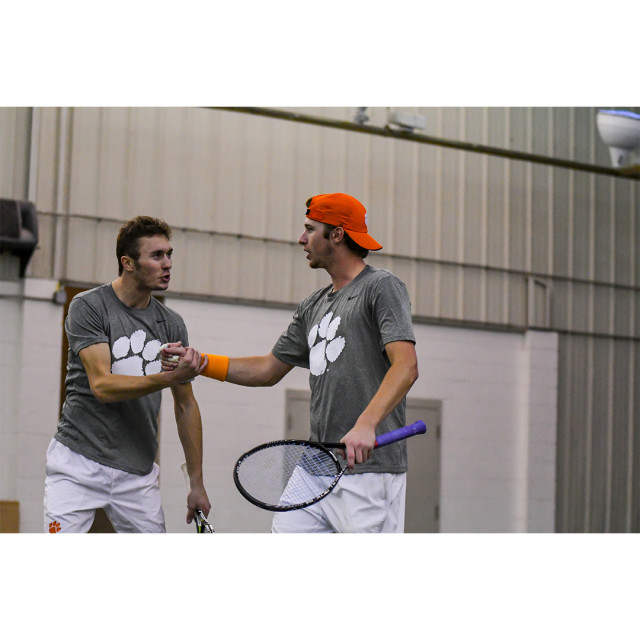 CLEMSON, S.C. – The Clemson men’s tennis team continued the 2017 fall season this past weekend at the Saint Francis Health System All-American in Tulsa, Okla. and in the SC Collegiate Invite in Belton, S.C. The Tigers were represented by seniors Sam Edwards and Alex Favrot at the ITA All-American and were led by Marshall Dagostine, who won the consolation final in the Russell Singles Draw.

Favrot lost in a heartbreaking three set tie-breaker in the first round of the ITA All-American to Scaglia of Oklahoma State. The duo of Edwards and Favrot came up just short in the doubles tie-breaker, falling to Babic and Hansson of Ole Miss, 3-6, 6-3, 10-6.

Sophomore Dagostine led the way in Belton, S.C., winning the consolation final in the Russell Singles Draw. On his way to the championship, Dagostine only gave up one set after falling in the first round. In the semifinals, he defeated Greaves of North Greenville, 6-4, 6-3 to advance to the finals, where he faced Croyder of Furman University and defeated him 2-6,7-5, 6-3.

Other Tigers in action at the SC Collegiate Invite were Wesley Quattlebaum, Reed Rabideau, and William Van Geleren. In the Cabri Singles Draw, Quattlebaum defeated Sartain of Anderson 3-6, 6-2, 6-4 to advance to the quarterfinals, where he fell to Pistorious from Furman, 6-0, 6-1.

In doubles play, Quattlebaum and Van Geleren teamed up to make a run to the Demars Doubles Draw consolation semifinals. In the quarterfinals, the duo defeated Green and Sartain of Anderson, 8-7 (8), before falling to Boulay and Talic of Coastal Carolina, 8-2.

The Tigers are back in action on Oct. 13 when play begins in the ITA Regionals in Cary, N.C.