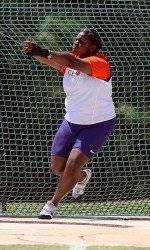 The women’s 4×100-meter relay won its section and was second fastest overall Saturday with a time of 43.45. The Tigers established a school record for the second time in three attempts this season, and were the top collegiate team in the results column. Bridgette Owens, Dezerea Bryant, Marlena Wesh and Jasmine Edgerson made up the women’s 4×1. The men’s 4×1 had a time of 40.53 and was 13th out of 39 teams.

The men’s shuttle hurdle relay had the top collegiate time on Saturday at 55.38, second-best among all teams. It was the No. 2 time in Clemson history. The team was made up of Spencer Adams, Charlton Rolle, Marcus Maxey and Elijah Britton.

The women’s shuttle hurdle relay took third Saturday, and did it with a school record despite competing without NCAA indoor 60 hurdles runner-up Brianna Rollins. The team of Owens, Monique Gracia, Keni Harrison and Edgerson combined to a time of 52.87, also a Percy Beard Track and Florida Relays collegiate record.

Sinkler matched her season-best in the women’s triple jump, finishing second by a mere centimeter. The graduate jumped 43’8.5″ on her second attempt during the finals, here fifth attempt overall. Jasmine Brunson was fourth in the event at 41’11.5″.

Waller had a season-best hammer throw of 180’7″ to earn a second-place honor Saturday. The junior from Greenville, SC completed the throw on her third attempt of the preliminary round.

In other field action Saturday, freshman Torian Ware took 10th place in the men’s high jump. He had a clearance of 6’8.75″. In the triple jump, another freshman, Shai Carpenter, was 10th out of 30 competitors with a leap of 49’4.5″. Marcus Brown was the Tigers’ top performer in the men’s discus in ninth place, while Cory Thalheimer was eighth in the shot put.

The final preparations are done for the ACC Outdoor Championships, which will be held April 19-21 in Charlottesville, VA.