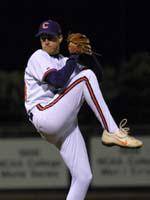 Clemson, SC – Robert Rohrbaugh pitched a career-high 6.0 innings to lead the Tigers to a 6-5 win and series sweep over Wake Forest Sunday afternoon at Doug Kingsmore Stadium. The sophomore lefthander struck out five batters and allowed only two earned runs in picking up his first career win. Clemson improved to 12-10 overall and 3-0 in the ACC. The win was also Clemson’s first in five tries in one-run games. Wake Forest dropped to 11-14 on the season and 1-5 in conference games. Tim Morely suffered the loss for the Demon Deacons, falling to 2-2 for the season.

The Tigers increased their lead to 4-0 in the fourth inning. Brady Everett started the inning with a walk. John Ingram followed with a single through the left side and Russell Triplett advanced the runners with a two-strike sacrifice bunt. Ryan Hub then chopped an 0-2 pitch up the middle to score Everette and Ingram. After Hub stole second base, Demmink plated him with a single through the left side.

Wake Forest scored two runs in the top of sixth inning to cut Clemson’s lead to 4-2. Ben Ingold led off the inning with a single up the middle and then stole second base. Brad Scioletti singled through the left side, moving Ingold to third base. Ingold scored on Ryder Mathias’ sacrifice fly to center field. Doug Riepe then hit a double to left center field, scoring Scioletti from first.

Clemson added two more runs in the bottom of the sixth inning, runs that proved to be the difference in the game. Triplett hit a single up the middle to start the inning and advanced to second base when the pitcher overthrew first base on a pickoff attempt. He reached third base on Hub’s groundball to the second baseman. After Garrick Evans walked and took second on a passed ball, Demmink singled through the left side to score Triplett. Harvey followed with a single by hitting an 0-2 pitch to right field, driving in Evans from third base.

The Demon Deacons scored three runs in the ninth inning for the final 6-5 score. Matt Miller hit a single to center field off of Tiger pitcher Colin Mahoney. After Steve LaFaivre walked, pinch hitter Nick Blue singled through the right side to load the bases. After Mahoney struck out the next two Demon Deacons looking, J.B. Tucker doubled down the left field line to clear the bases. Tucker led Wake Forest with three hits and three RBIs.

Demmink, Harvey and Hub each recorded two RBIs for Clemson in Sunday’s effort. Demmink was also 3-for-5 with one run scored. Josh Cribb pitched two scoreless innings for the Tigers in relief.

Clemson’s next game will be on Tuesday, March 30 against Georgia in Athens. The game is scheduled for 7:00 PM. The two teams will meet again at Doug Kingsmore Stadium on Wednesday, March 31. Wednesday’s game time is 7:15 PM.