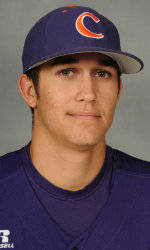 In his first career start, sophomore righthander Jonathan Meyer pitched 7.0 strong innings to lead Clemson to a 9-2 victory over Boston College in front of 1,342 fans in the second game of a doubleheader at a cold and windy Commander Shea Field on Saturday afternoon. The Tigers, who swept the series 3-0, improved to 22-13 overall and 9-9 in the ACC. The Eagles fell to 13-20 overall and 6-11 in ACC play.

The Tigers took a 3-0 lead in the first inning before the Eagles scored two runs in the second inning. But the Tigers scored single runs in the third and sixth innings before putting the game out of reach with four runs in the eighth inning.

Meyer (3-0) pitched a career-long 7.0 innings to earn the win. The San Diego, CA native allowed five hits, two runs, and one walk with seven strikeouts. Scott Weismann, a native of nearby Boxborough, MA, pitched 2.0 scoreless innings of one-hit ball with three strikeouts to close out the victory.

The Tigers jumped out to a 3-0 lead in the first inning. John Hinson led off with a single through the right side and Brad Miller singled to right field to score Pohl. After Miller stole second and third, he scored on a wild pitch.

The Eagles responded with two runs in the second inning. Kyle Prohovich led off with a single through the right side and scored on Mike Sudol’s triple to right field. Marc Perdios’ groundout to short plated Sudol.

In the third inning, Will Lamb hit a one-out single up the middle to up his hitting streak to 10 games and moved to second on a throwing error on a failed pickoff attempt. After Dominic Attanasio walked and the runners both stole a base, Lamb scored on a wild pitch.

In the eighth inning, Hinson reached with one out when centerfielder Tom Bourdon dropped a flyball. Pohl was intentionally walked, then Schaus ripped a single to right field to score Hinson. Shaffer followed with a double to left field to score Pohl, then Miller laced a double to left-center to score Schaus and Shaffer. Shaffer’s double extended his hitting streak to 11 games.

Pohl went 3-for-5 with two runs and a walk to lead the Tigers, who had 12 hits despite strong winds between 15-25 miles per hour blowing in from left field all weekend. Miller went 2-for-4 with a double and game-high three RBIs.

Matt McGovern had a team-high two hits for Boston College, who had six hits in the game.

Clemson will travel to Athens, GA to face Georgia on Wednesday at 7:00 PM. The game will be televised live by CSS.