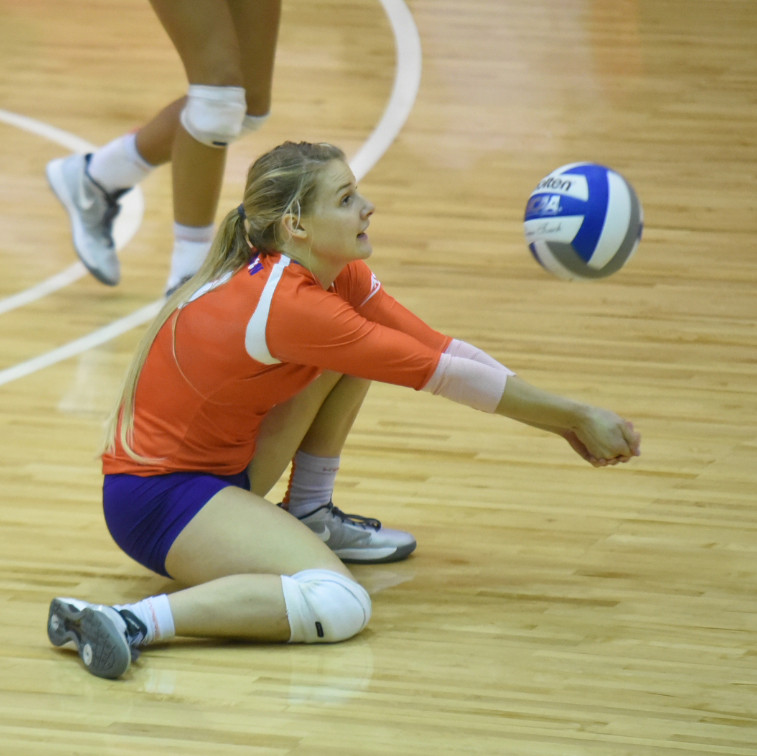 “One of the two things that stood out to me was that I really liked the way we responded to us not being us on Friday,” said head coach Hugh Hernesman. “I think today what you saw was Clemson volleyball and where it’s going to be. I felt like we were much better connected and we did the little things with importance. We executed our game plan a lot better. So they deserve a lot of credit for being able to bounce back.”

“I think the other thing too was this team has the ability to really fight. When we went down 8-2 in the third and fourth sets, I’ve seen a lot of teams that would just roll over in that situation and we didn’t do that.”

“That’s a very talented, physical Syracuse team. They’re fun to watch and they have some really good players. So it wasn’t an easy task and for us to be able to exploit some things that we saw and do some of the things we feel do well against a really good team was encouraging. We got better today and that has been our biggest focus is that if we can continue to improve every day, it’ll pay off.”

Clemson’s fight was sparked by high effort plays from liberos Keelie Arneson and Kennedy Wilson-Talmadge. Arneson led the defense with 22 digs and is now just 10 digs away from breaking into the NCAA’s list of top 25 career digs leaders. Wilson-Talmadge played her best match yet as a defensive specialist recording a career-best 16 digs. The performance marks her first match with 10 or more digs.

“Those two back there… that’s ridiculous speed and ridiculous talent. What I liked seeing the most from them was I think when they do what they do, they inspire the rest of the team in that area.”

Three Tigers that fed off of their athleticism was Sydney Moseley, Kate Federico and Kailey Harvell. Federico and Moseley each finished with 10 digs while Harvell was just two shy of matching them with her eight digs.

“Kailey Harvell had a sick dig for set point in the third where she came up and played a seam ball on the middle of the floor on a hard driven slide from 19 (Santita Ebangwese). That’s not an easy play, that’s a veteran play and that’s a play that we’ve come to expect from players that have been in our system. We’ve seen that before but not a lot of times from freshmen. So that was a big dig in a big moment.”

“I think what you see there becomes very contagious. When we’re tuned into each other I think Kennedy can inspire you with how hard and how well she plays, Keelie does the same exact thing and I think those two feed off of each other as well. That was fun to watch. That’s a Clemson brand that you are going to get used to seeing is that type of defensive effort and that will pay off.

Offensively, Harvell was the Tiger on the floor that shined the brightest as she finished with a career-best 17 kills to go along with five aces and her eight digs.

“Kailey got a lot better today. It’s interesting, she has such a steady personality that she steadily improves and what I noticed today was she learned to play high today.”

Harvell made improvements in her game right away, hitting .307 in the final three sets with 16 kills on 39 swings with just four errors.

“Here’s a player that in her past between high school, club and all that could just put balls to the floor and play low to the tape because she could create those angles. Well you can’t do that at this level, not in the ACC and certainly not against Syracuse as big as their block is. So she started playing high off of those hands, getting them in good places and deflecting the ball for kills and if nothing else, to take them out of system. What I think you saw from her was the confidence to be aggressive, be aggressive at the block when the block wasn’t formed and she has some pretty good vision too when she would see a hole or when there was a little bit of light, she found it and put the ball to the floor. It was a very complete game that will take her to the next level.”

Federico’s play didn’t go unnoticed as well as she recorded her seventh double-double of the season with her 42-assist, 10-dig effort.

“Where I found Kate most impactful defensively was that I felt she played really good off-blocker defense. She made a couple of digs that were kind of random scramble plays, she made good volleyball plays in those situations in key moments. We talk about that in tight sets and key rallies to be engaged and I thought she did a very good job of that.”

Middle blockers, Sofia Hruby and Megan McGinley showed their improvement as well as Hruby was efficient in her attack, hitting .294 with six kills with her two blocks and McGinley was able to read the ‘Cuse offense to tally four blocks.

“Sof was efficient again, she’s going to be low error most of the time. I wish we could have gotten her the ball a little bit more especially in the second set. I felt like Megan was moving a little bit better today. She was using her eyes a little bit better, she saw patterns and she knew situations and I felt like mentally she was really locked in this match so it was good to have that presence from her.”

Clemson ventures south for its first ACC road trip as the Tigers are set for matches against Florida State at 7:00 p.m. on Friday and Miami on Sunday at 1:00 p.m. Both matches will be aired on ESPN3.