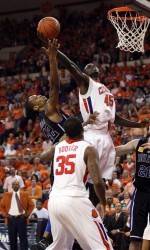 CLEMSON, S.C. (AP)–Trevor Booker shook off missing his first 12 shots to score nine of his 10 points down the stretch as Clemson broke a three-game losing streak with a 62-53 victory over Maryland on Sunday night.

Booker was the Atlantic Coast Conference’s field goal percentage leader last season and he came through when the Tigers (16-6, 4-4 ACC) needed it most.

Jerai Grant had a career high 18 points along with 10 rebounds for the Tigers. Booker had 16 boards.

Jordan Williams had 13 points to lead Maryland, which has lost three straight to Clemson.