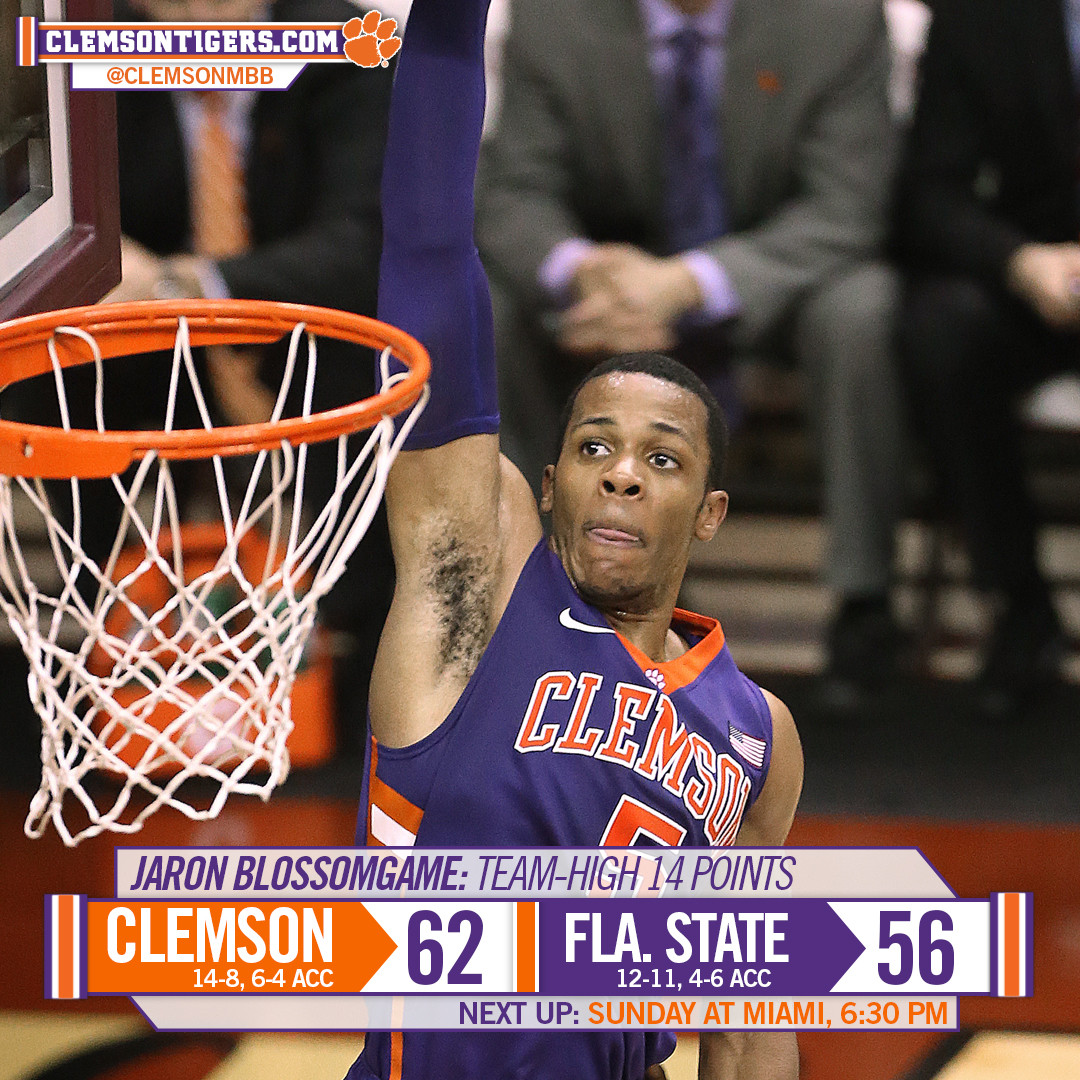 TALLAHASSEE, Fla. — The Tigers built a double-digit lead on the road, and hung on in the final minutes despite a rash of missed free throws in a 62-56 victory over Florida State in the Donald Tucker Center on Wednesday. The win, Clemson’s third ACC road triumph of the season and fourth straight overall, pushed the Tigers to 14-8 (6-4 in league play). FSU dropped to 12-11 and 4-6 as the Tigers split the season series.

“We were really ready tonight,” said Head Coach Brad Brownell. “I thought we played well during the middle part of the game and hung in there at the end. We gave them plenty of chances, but Josh (Smith) came up big in the end for us.”

Smith scored eight points, but made two critical free throws in the final seconds followed by one of his eight rebounds on the defensive end that secured the win. Jaron Blossomgame led the scoring with 14 points, while Donte Grantham and Jordan Roper both chipped in 13.

Clemson fell behind by six early, 15-9, as Xavier Rathan-Mayes picked up where he left off from the first meeting. But Austin Ajukwa answered with a transition three and layup, and Grantham nailed a three as the Tigers tied the game at 17 at the eight-minute mark. FSU regained a four-point lead at 21-17, but Clemson finished the half on a 10-0 run that included six Jordan Roper points.

The Seminoles cut the deficit to four at 37-33, but the Tigers had an answer. Roper hit a pair of free throws, and Blossomgame followed with a transition three to expand Clemson’s cushion back to nine at the under-12 timeout. The lead later was cut to 44-39 for several minutes, but Rod Hall hit a bucket that opened up Clemson’s offense. Grantham hit a big three, and followed with a layup to extend the lead back to double digits again.

It was a hairy final two minutes, as Clemson struggled from the free throw line and the Seminoles kept scoring. The lead was cut to just two points at 58-56 after Devon Bookert hit a pair at the line, setting up Smith’s late heroics inside the final 20 seconds. Following his final rebound, Roper added two free throws to ice the win.

Clemson’s trip to the state of Florida resumes Sunday with a 6:30 p.m. contest at Miami. The game will be televised by ESPNU.