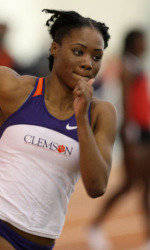 Keni Harrison raced out of the blocks in the 60 hurdle prelims to a time of 8.35 – sixth-best in Clemson history. The freshman out of Clayton, NC ran 8.37 in the final to earn the victory roughly an hour later. In the men’s high hurdles, Marcus Maxey produced a lifetime-best time of 7.87 in the preliminary round. He followed up with an even better time – 7.85 – in the final as he finished runner-up. His time ranks in a tie for eighth in Clemson history.

The women’s program claimed wins Friday in the 300 dash and 500 dash. In the 300, freshman sensation Dezerea Bryant posted a time of 38.85 to best teammate Stormy Kendrick by two hundredths of a second. Marlena Wesh established a school record in the 500, as she ran to a time of 1:12.36 to outlast Harrison in her heat for the victory.

On the men’s track side, junior Warren Fraser captured a first-place effort in the 300. The native of the Bahamas clocked a time of 34.51, which broke the Clemson Indoor Track Facility record. He then led the men’s 4×400 relay to a winning time of 3:18.24. The women’s 4×4 was also victorious on Friday, posting a time of 3:47.03.

C.J. Davidson was second place in the long jump from a short approach with a leap of 22’6.5″.

Cory Thalheimer claimed the lone victory credited to the Tigers in the throws. The junior from Hopkinton, MA won the men’s shot put with a toss of 54’3.25″. Also in the field, Lauren Terstappen and Brittney Waller took home runner-up honors in their respective events, the pole vault and 20-pound weight throw.

The Tigers will take off several weeks before resuming the indoor season after the New Year. Clemson’s next competition will be the Virginia Tech Invitational in Blacksburg, VA from Jan. 13-14, 2012.