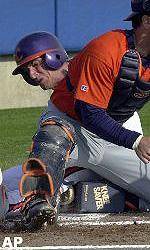 CLEMSON, SC – The third-ranked Clemson baseball team plated four runs in the bottom of the sixth inning to break a 1-1 tie en route to a 8-5 victory over Auburn on Saturday at Doug Kingsmore Stadium. A crowd of 4,733 saw the Tigers claim their second consecutive victory over Auburn. Clemson posted a 7-4 win in the season opener on Friday afternoon.

Clemson opened the scoring in the bottom of the fourth inning on a one-out double by Khalil Greene that scored David Slevin. Auburn evened the score in the top of the sixth inning on when Doug Vines scored on a sacrifice fly Tug Hulett.

Clemson took the lead for good in the bottom frame of the sixth. With the bases loaded right fielder Jarrod Schmidt coaxed a walk from reliever Steve Register to score David Slevin. Freshman designated hitter Jeff Hourigan followed with a single to leftfield scoring Jeff Baker. Greene closed the scoring on a single which scored Schmidt. Slevin, Geene, Hourigan and Kyle Frank led the offensive attack with multiple hits each.

Game three of the series will begin at 2:00 PM on Sunday. Steven Jackson (0-0) is slated to take the mound for Clemson and Eric Brandon (1-0) is scheduled to pitch for Auburn.

Scheduling Note: Due to a time change for the South Carolina men’s basketball game, the Clemson-South Carolina baseball game in Columbia on Saturday, March 2nd, will now begin at 4:00 PM instead of 1:30 PM.