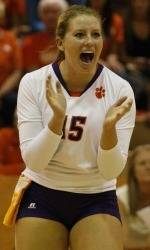 Clemson withstood 21 kills from Wake Forest outside hitter Kadija Fornah and 14 from reigning ACC Player-of-the-Week, Carlin Salmon. The win gave head coach Jolene Jordan Hoover her 388th in her Clemson career, and 187th in ACC play. Hoover was coaching against one of Clemson volleyball’s all-time playing greats and a former assistant in Heather Kahl Holmes, who is in her sixth season as Wake’s head coach.

Clemson’s three freshmen had a huge impact on the match. Outside hitter Kristin Faust had 11 kills and nine digs, while also going a perfect 21-for-21 on serve receive and putting down two aces. Kamryn Sherman had 24 assists, seven digs, and three aces for Clemson, and Karis Watson had three kills and a career-high five blocks in the match.

Other very strong performances came from Alexa Rand and Serenat Yaz. Rand had nine kills against just one error in 16 swings, upping her season hitting to .444. She entered ranked tops in the conference and seventh nationally in hitting percentage. She also added four blocks in scoring 11.5 total points. Yaz had nine kills, nine digs, two aces, and was 14-for-14 on serve receive.

Mo Simmons also had a quiet nine kills and hit .304 in the match.

The win kept Clemson’s win streak alive at six as they head to Durham to take on Duke on Saturday at 8:00 pm. Duke is coming off a 3-0 win over Georgia Tech on Friday night as well.

With the win, Clemson improved to 26-12 all-time against the Demon Deacons, and avenged last season’s two losses to Wake Forest.

The first set was extremely fast-paced and was tight the whole set, as indicated by the 15 tie scores and seven lead changes. Neither team was able to really grab a foothold until Wake Forest took a 17-14 lead, but Clemson stormed back to tie it at 20-20, and even took a lead at 23-22. But Wake Forest rattled off three straight, and took the set, 25-23, when Adeleye’s attack found the net.

Clemson didn’t stay down for long, jumping out to a 9-4 lead in the second set behind three quick aces. Wake Forest went on a 7-1 run to take an 11-10 lead, but Clemson countered with a 5-0 run after a hoover timeout. Clemson stretched the lead to 20-15, and the Tigers blocked two Salmon attacks to take the 25-18 win to tie the match. Clemson held the Deacs to -.029 hitting in the set.

The Tigers came out of intermission with a purpose, blasting 33 kills against five errors in the final two sets. Clemson looked to take early control in the third set at 13-8, but Wake Forest took a 16-14 lead after a 6-0 run. The Tigers clamped down, allowing just four points the rest of the way, and 11 of their own to take a 2-1 match lead.

Adeleye established herself as the primary option, finding the floor seven times. The set was tight throughout, and Clemson was only able to pull away after a key 5-1 run put them ahead 22-18. Serenat Yaz recorded a kill to bring Clemson to a 24-21 lead, and a Wake Forest error sealed it for the Tigers.