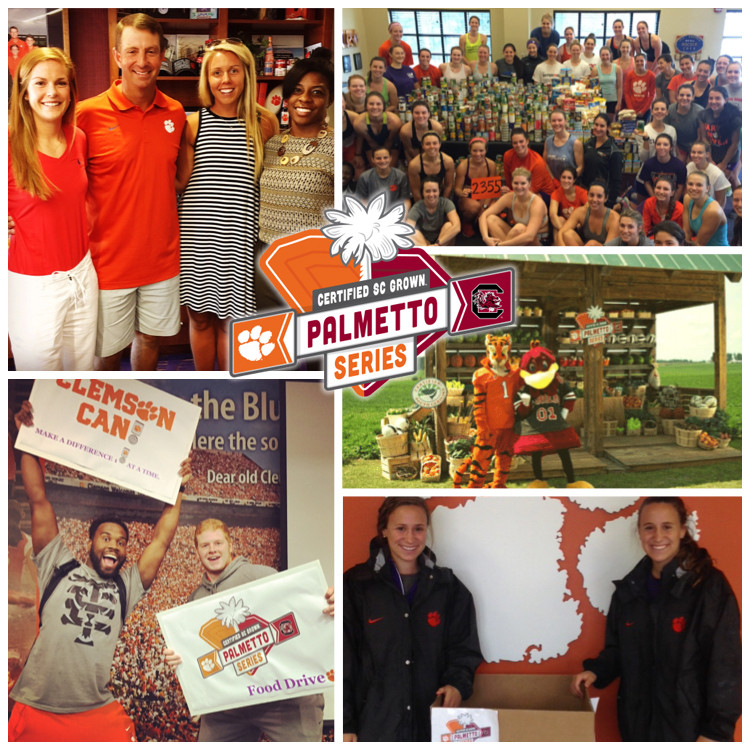 The Clemson-Carolina Can! initiative is now in its third year of operation. Directed by Clemson University student-athletes, this event has evolved to become part of the SC Department of Agriculture’s Certified SC Grown Palmetto Series Food Drive, a competition between Clemson University and the University of South Carolina.

The Palmetto Series Food Drive is a fundraiser that plays on the rivalry as a means of collecting canned goods to benefit local food banks. Last year, Clemson University collected 18,840 pounds of food, raised $22,455 in cash donations, and provided 126,772 meals for those in need in our state.  The University of South Carolina collected 9,468 pounds of canned goods, raised $11,939 in cash donations and provided 66,978 meals to individuals at risk of food insecurity.  Together, both schools helped to provide almost 200,000 meals to South Carolina’s hungry!

Harvest Hope Food Bank and Golden Harvest Food Bank, both official food banks of the Feeding America national network, are partnering together to produce this drive. They are driven by the mission of serving 1 in 6 people, including children and seniors, in South Carolina who go to bed hungry every night. By providing food and donations to Harvest Hope and Golden Harvest Food Banks, we fight the battle against food insecurity that is so prevalent across our state.  For the third time, during the weeks of Monday, October 23rd through Monday, November 20th Clemson University and University of South Carolina face off to serve a greater cause.

who are all fully committed to the cause.  As we expand this year’s food drive to raise more meals and greater awareness, we are raising the support of local retail grocery stores as well as emphasizing a larger marketing approach. We believe that as our Third Annual Palmetto Series Food Drive is growing, we CAN make a difference, not only in our own community but across our state.