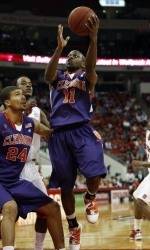 Jerai Grant scored 12 for the Tigers (18-9, 7-6 Atlantic Coast Conference), who have won the last five meetings with Miami.

Down by three in the final moments, the Hurricanes (16-11, 4-8) never had the chance for a potentially tying shot.

Clemson elected to foul Adrian Thomas with a three-point lead with 3.4 seconds left. Thomas made one, Stitt got the rebound and was fouled with 1.7 seconds remaining, hit two free throws and Clemson escaped.

Durand Scott scored 16 for Miami and Thomas added 13. It was Miami’s ninth ACC game to be decided in the final seconds – the Hurricanes dropped to 4-5 in those contests.

Miami had its chances, especially after seeming to be in command late in the second half.

Malcolm Grant – the Hurricanes’ leading scorer at 15.3 points per game coming into Sunday – had been scoreless until hitting a 3-pointer with 5:49 left to put Miami up 50-48. And 59 seconds later, he showed a flair for the dramatic.

He made a 3-pointer from the right corner while getting fouled by Stitt, added the free throw and the Hurricanes were up 54-50.

They went scoreless for the next 3:05, and Clemson came right back.

Young’s 3-pointer put Clemson back ahead 55-54 with 2:09 left – but the lead was a brief one, as was the case for both teams all day. Miami reclaimed the lead on Scott’s layup on the ensuing Hurricanes’ possession, only to have Young make a pair of free throws with 34 seconds left to put Clemson ahead by one again.

Miami had two chances to either tie or take the lead in the final half-minute, coming up short on both. Scott made one of two free throws with 12.5 seconds left, getting the Hurricanes within one, 59-58.

Young made a pair of free throws 1.6 seconds later. Miami went to Scott to advance the ball, then called its final timeout with 5 seconds remaining. Whatever they drew up was thwarted quickly when Clemson chose to foul, and now the Hurricanes have to win out just to reach .500 in ACC play.

Clemson led 28-27 at the half, after looking like it was on the cusp of taking control just moments earlier.

Miami managed only one field goal over a 4 1/2-minute stretch late in the half, and the Tigers opened a 28-21 lead with a 10-2 spurt. Rion Brown ended the Miami drought with a 12-footer from the right baseline, and the Hurricanes wound up scoring the final six points before intermission.

Clemson had its own early offensive issues as well. Miami had three defensive possessions where it forced Clemson into either a shot-clock violation or rushing a jumper just before the 35-second clock would expire in the first 9 minutes alone. And the teams went a combined 2 1/2 minutes midway through the half with no scoring, things stuck with Miami up 11-8.

Much like when Clemson had its biggest lead and squandered it quickly, Miami did the same midway through the second half.

A pair of free throws by Reggie Johnson with 9:16 left put the Hurricanes up 44-39, their largest cushion to that point. It was gone in less than 90 seconds; Stitt made two free throws with 7:34 left for a 46-45 Tigers lead – the start of a back-and-forth all the way to the end.