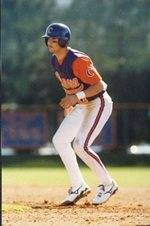 Conway hammered a three-run homer down the left field line in the eighth inning to put the Deacons in command. Conway had three hits on the day and drove in three. Corey Sullivan had three hits and stole a base to help the Deacons, who have won 12 of their last 14.

Wake Forest had two home runs on the day. Clemson pitching had given up just seven round-trippers all year heading into the game. Wake Forest also had 12 hits on the day.

Clemson was led at the plate by Justin Singleton, who had three hits and is now seven for his last eight at the plate. Ryan Riley added two hits and a walk and also reached on an error and drove in a run. Mike Calitri had a double and Khalil Greene a triple for the Tigers.

just five hits and one earned run. He struck out eight and walked two in elevating his pitching record to 6-0 for the season. Clemson starter Scott Berney fell to 7-4 in taking his fourth straight loss.

Wake Forest took a 1-0 lead in the top of the third when Corey Sullivan had a one-out hit. Sullivan scored on a double by Chase Voshell, who had two hits on the day.

The Deacons made the count 2-0 with another single run in the fifth. With one out Sullivan again singled. After he stole second, he scored on Voshell’s single down the left field line. Wake Forest made it 3-0 in the sixth on Borrell’s leadoff home run to right field, his 10th home run of the season.

Clemson cut the margin to 3-2 with two runs in the seventh. Calitri led off the frame with a double to left center. He moved to third on a fly ball out by Jarrod Schmidt and scored when Ryan Riley’s ground ball to second was mishandled. Riley then moved to second on a sacrifice by Justin Singleton and scored on a single to right by Casey Stone.

Wake Forest broke open the close game in the eighth with three runs. Jason Aquiliante doubled to right field to open the inning. One out later, Borrell walked. With runners on first and second, Conway delivered off Clemson reliever Paul Harelson for his 13th home run of the season to make the score 6-2.

Clemson will play host to Elon College on Tuesday night at 7:15 PM.