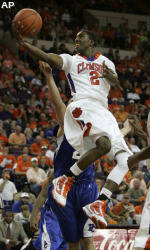 Clemson, Butler to Face Off Sunday in 76 Classic

ANAHEIM – Clemson will wrap up the 76 Classic on Sunday by facing Butler, the nation’s No. 10 ranked team according to the latest ESPN/USA Today coaches’ poll. The Tigers are coming off an 87-79 win over Long Beach State, while the Bulldogs held off local favorite UCLA 69-67 in the late game Friday. Sunday’s game between the two schools will be at 7:30 PM (EST). It will be televised by ESPNU.

Clemson will be looking for its first win over a top-25 ranked non-conference team since 1997. The Tigers’ last win over a non-conference top-25 foe was Dec. 17, 1997, when Clemson knocked off rival South Carolina by a score of 62-57 at home. The Gamecocks were No. 6 in the country at the time.

This will be just the second meeting ever between Clemson and Butler on the hardwood. The Tigers won the first matchup, a 1999 home game in the postseason NIT. Clemson won 89-69 to advance to the semifinals of the NIT in New York City. Tiger post player Harold Jamison had a big night against Butler, as the senior poured in 26 points to lead the offense.

Clemson enters Sunday’s contest with a 5-1 record, 1-1 in the 76 Classic. After dropping their opening round game to Texas A&M, the Tigers bounced back Friday with an eight-point win. Six players scored double figures for Oliver Purnell’s squad, including Tanner Smith who scored a career-high 17 points. Demontez Stitt made 7-14 shots and scored a season-best 16 points, while adding five assists against only one turnover. Andre Young (13) and Bryan Narcisse (10) also matched career highs in the victory.

Butler enters Sunday’s game with a 4-1 record, 1-1 in the tournament. The Bulldogs fell to a ranked Minnesota team in the opening round, before rebounding to victory late Friday over UCLA. Butler’s lineup features five returning starters, including Horizon League Player-of-the-Year Matt Howard. The Bulldogs won the Horizon League last season and finished with a 26-6 overall record.