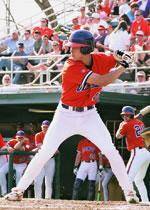 Clemson scored a school-record 11 runs in the second inning on its way to an 18-9 victory over #24 Florida State on Monday afternoon in front of 3,184 fans at Doug Kingsmore Stadium. Clemson, ranked as high as #13 in one poll released Monday, had nine extra-base hits in the game after having none in the first two games of this series. The win improved Clemson to 28-16, 12-6 in the ACC. Florida State fell to 29-17, 8-7 in the ACC. The Tigers salvaged the three-game series with the win in game three.

Collin Mahoney (1-2) recorded his first career win at Clemson. He gave up no earned runs and struck out two in two innings of work. Steven Jackson started for the Tigers, but only pitched three innings. Eddie Cannon (7-5) got the loss for the Seminoles.

Six Tigers had multiple hits in the game, while seven had multiple RBIs. Clemson had 18 hits in the contest. Tyler Colvin had a career-high four hits in the game, to go along with three RBIs. His three doubles tied a Clemson single-game record. The last Tiger to hit three in one game was Khalil Greene versus South Carolina in 2002. Tony Sipp and Andy D’Alessio had three hits in the game as well. Aaron Cheesman was 2-3 with two RBIs for the Seminoles.

For the third straight game, Clemson had an early lead. Sipp led off with a single, advanced to second on a wild pitch, then scored on Brad McCann’s 11th home run of the season. However, the Seminoles answered in the bottom of the frame with an RBI double from Ryne Malone.

Clemson broke the game open after the 11-run second inning. Colvin hit an RBI double. His shot to left field was in play after it hit the glove of Seminole left fielder Gibbs Chapman, who dove to grab the ball down the left field line. The Tigers added four more runs off starter Eddie Cannon. Sipp and D’Alessio drove in three runs with singles, while Travis Storrer hit an RBI double.

Then, Russell Triplett drove in a pair of runs on a sharp single to shortstop. Colvin came around again and hit a two-RBI double, while John Ingram added his fourth homer of the year. The 11 runs marked the most ever by a Clemson team in the second inning.

Clemson tacked on three runs in the third. Lou Santangelo hit his 13th homer of the year, a three-run shot down the left field line. Through three innings, every Tiger batter had scored at least one run.

Florida State put up seven runs in the fourth inning. Malone and Shane Robinson had RBI singles, while Bryan Zech drove in two runs with a double to the right center field gap. Four of the runs were off of reliever Steven Jackson. Zech scored the fifth run of the inning on a wild pitch from Jeff Hahn. Then, catcher Aaron Cheesman hit a two-run double down the left field line.

The Tigers scored two runs in the fifth. Triplett hit an RBI single down the right field line to score D’Alessio. Then, Sipp drove in his second run after he beat out a possible double play ball at first base.

Clemson returns to action at Doug Kingsmore Stadium on Wednesday against Charleston Southern. The Tigers and Buccaneers are scheduled to play at 7:15 PM.