CLEMSON, S.C – The Clemson Volleyball team improved to 5-2 overall on the season after sweeping Appalachian State (2-5, 0-0 Sun Belt), 25-22, 25-21, 25-23, in Jervey Gym Tuesday night. Clemson outside hitters Brooke Bailey (12 kills) and Kaylin Korte (11 kills) led the offensive attack for the Tigers. Korte also registered her eighth career double-double – and third of the season – as she tallied 13 digs in addition to her 11 kills. Defensively, senior Emily Curtis got the nod at libero for the first time this season and poured in a season-high 17 digs, the most by a Tiger in a three-set match this season.

Clemson came out swinging to open the first as the Tigers found themselves up eight points, 24-17, in position to close out the set. The Mountaineers would put up a fight, cutting the Clemson lead to two points, 24-22, but an App State service error gave Clemson the set, 25-22, and 1-0 lead. Bailey had six of her team-high 12 kills and hit .750 in the opening frame, while Curtis posted nine digs.

In game No. 2, it was Clemson that looked to spark a comeback late in the set. With the Mountaineers leading 20-17, the Tigers fired off five straight points with Madi Howell behind the service line to take set No. 2, 25-21. Korte, who registered six of her 11 kills in the second, rang up back-to-back kills to end the set and give the Tigers a boost of confidence heading into the break.

💪Kaylin Korte extends the Clemson lead in the second with this BIG SWING!

Coming out of the locker room, both teams were neck-and-neck as the Jervey crowd saw nine tie scores and three lead changes in the third and final set. Clemson grasped a 23-19 lead late in the game, but the Mountaineers made a late-set push, claiming four unanswered points to tie the set, 23-23, before Clemson head coach Michaela Franklin signaled for timeout. Coming out of the huddle, Bailey registered her 12th and final kill of the match, which was followed by a Mountaineer attack error to give Clemson the set and match.

Up next, Clemson (5-2, 0-0 ACC) returns to Jervey Gym Thursday, Sept. 12 as the Tigers host South Carolina (4-3, 0-0 SEC) at 7 p.m. ET. Thursday’s matchup against the Gamecocks is set to stream on ACCNX. All Clemson home regular-season matches in Jervey Gym are free general admission for the public. 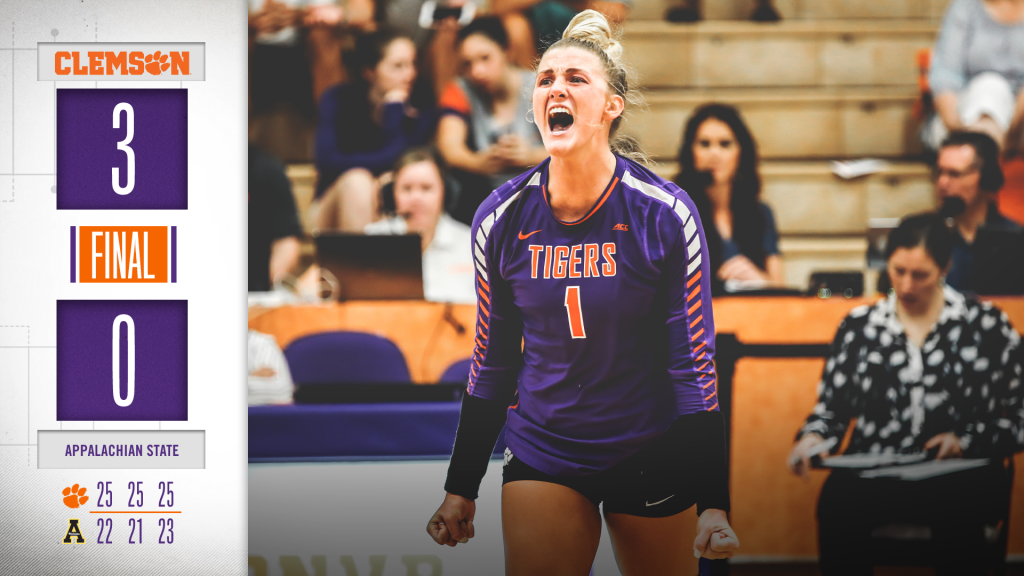