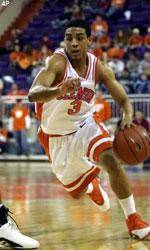 Vernon Hamilton led five Clemson players in double figures with a near triple-double 13 points, 11 rebounds and nine assists as the Tigers defeated future ACC foe Boston College 72-62 at Littlejohn Coliseum on December 30. It improved Clemson’s record over the Eagles to 3-0 all-time.

Hamilton led the Tigers in rebounding and assists and tied for the team lead in scoring in his finest all-around performance of his young career. He had just one turnover in his 36 minutes to go with the nine assists and had four steals, all of which led directly to Clemson baskets. He was also a big reason Boston College’s starting backcourt scored just one point in the contest.

Shawan Robinson scored 13 points off the bench to tie for game scoring honors. The sophomore reserve hit 3-4 three-point shots and 5-8 field goals overall. It was the seventh time this year he had scored in double figures off the bench. Chey Christie, another guard, scored 12 points on 3-4 shooting, while Chris Hobbs added 11 points in 28 minutes. He suffered a sprained ankle in the final eight minutes of the game and did not return. Olu Babalola added 10 points in the balanced attack.

Boston College was not balanced as its star forward Craig Smith scored 28 points, 45 percent of the team’s total and added 12 rebounds. The Eagles were limited to 33 percent field goal shooting overall and 21.4 percent from three-point range. Boston College did win the rebound battle 38-33, thanks to 24 offensive rebounds.

Clemson played its top half of the year in the first half against the Eagles. Clemson jumped out to a 10-0 lead as the Tigers made four of their first five shots. BC cut the lead to six points at 19-13, but that was as close as they got in the first half. Clemson went on a 9-0 run to move the count to 28-13 with 6:53 left on a steal and score by Hamilton. The Tigers led 34-20 at intermission thanks to 15-26 shooting from the field. BC shot just 8-32 in the first half.

Clemson moved the lead to 44-20 with a 10-0 run to open the second half, as Clemson kept the defensive intensity going. It was still an 18-point margin with 6:13 left when Boston College mounted a comeback behind Smith. The Eagles got the margin under 10 with a couple of free throws by Steve Hailey with 2:15 left, then got it to six on a three-pointer by Smith with 1:11 remaining. But Clemson made its free throws down the stretch. Clemson was 10-12 from the line inside the last five minutes of the game and held the double digit lead at the final horn.