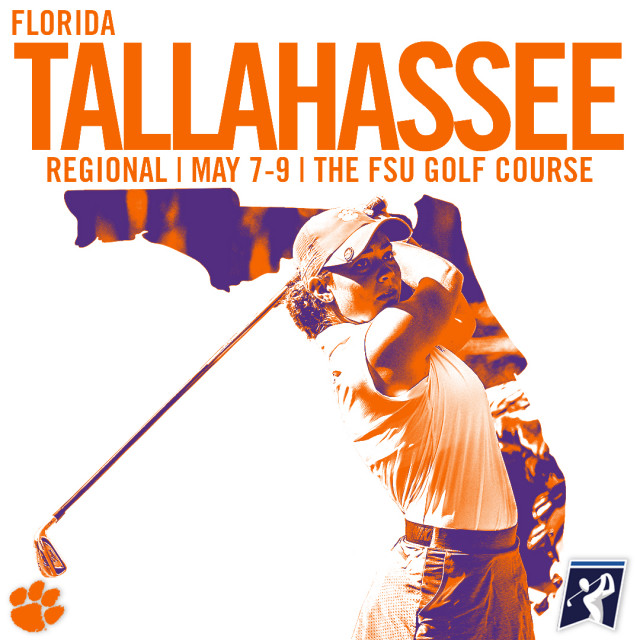 Clemson, S.C.—Clemson’s eighth-seeded women’s golf team begins play at the NCAA Tallahassee Regional on Monday at 8:50 a.m. Graduate student Marisa Messana will be Clemson’s first player off the first tee at the par 72 Don Veller Seminole Golf Club Course that is near the Florida State campus.

Eighteen teams will play 54 holes over three days.   The top six teams in the regional in Tallahassee will advance to the National Championship Tournament at Stillwater, Oklahoma at Karsten Creek, May 18-23.

Clemson’s five players will play with host school Florida State, the No. 7 seed, and ninth-seed Georgia, who served as host school of the regional Clemson played in last year.   Also in the Clemson lineup will be Kennedy Swann (9 a.m. tee time), Ana Paula Valdes (9:10 a.m.), Sydney Legacy (9:20 a.m.) and Alice Hewson (9:30 a.m.). Legacy and Hewson were both selected to the All-ACC team last week.

While Clemson is the No. 8 seed, Kelley Hester’s team has played well against the other teams in the tournament during the regular season. Clemson has a 6-3 record against the teams seeded three through nine. That includes a 3-1 record against host school Florida State. The only loss was by one shot at the ACC Tournament.

This will be Clemson’s fourth NCAA Tournament appearance in the five years of the program. Last year the Tigers were seeded 10th, but finished fifth at the Athens Regional in Georgia and advanced to the NCAA National Tournament where they finished a program best 20th.

All five Clemson starters this week played in the 2017 NCAAs. The Tigers are led by Hewson, a junior All-ACC performer who has a 72.22 stroke average and five top 10 finishes this year.   Legacy is a senior who is on a streak of five straight top 13 finishes. She joins Ashlan Ramsey as the only players in Clemson women’s golf history with five straight top 13 finishes. She has a 72.94 stroke average this year.

Messana is the fifth starter in the lineup. The Clemson graduate student was Clemson’s top player in the final round of the Athens Regional last year when Clemson qualified for the National Tournament for the first time.