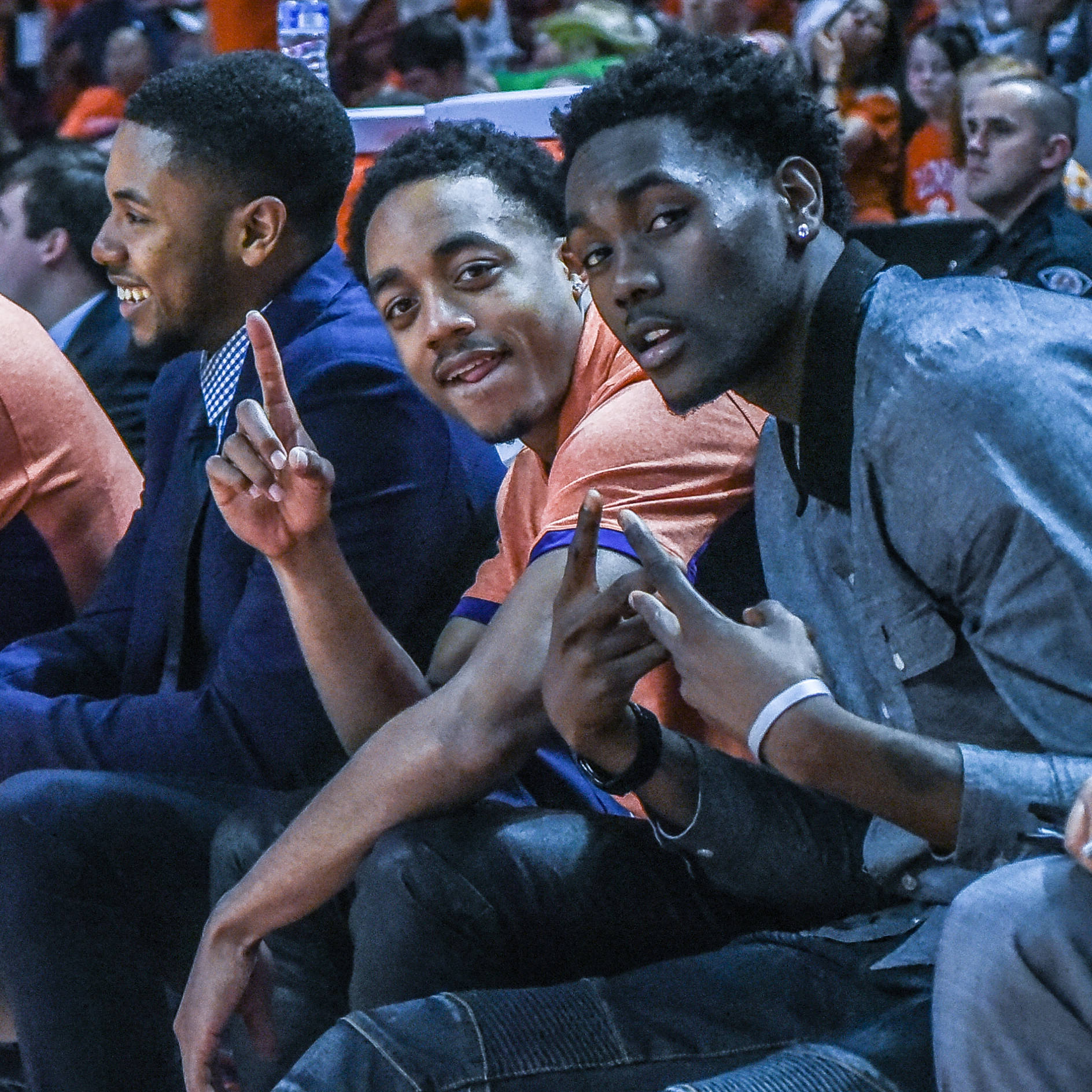 Clemson men’s basketball is enjoying a successful ACC season. The Tigers are 12-7 overall, and 5-2 in the ACC. However, their success isn’t due to what you see on the court alone. Clemson has a secret weapon — its scout team.

“I think our scout team is a lot different than any other scout team,” said Shelton Mitchell, a former point guard for Vanderbilt. “We’ve all played at a high level.

“Most other scout teams are just guys that will never get in the game. When we get on the floor, we don’t think we should lose.”

Mitchell is joined on Clemson’s scout team by former Division I players Marcquise Reed and Elijah Thomas, and together, the three have formed one of the most competitive units that will not be eligible until the 2016-17 season rolls around.

Thomas said that the three newcomers find joy in trying to beat their starting teammates.

“We take pride in trying to destroy our teammates,” said the newest Tiger, who transferred from Texas A&M after signing a financial aid agreement with Clemson in January. “Our goal is to make them work hard and never let them off easy. They are going to have to outplay us.”

Reed knows if the starters can outplay the scout team, they are in for a good season.

Reed made the move to Clemson so he could push himself harder than ever before.

“I transferred from Robert Morris, because I knew I wanted to play at a higher level. Robert Morris is in the Northeast Conference, but we had a good non-conference schedule (last season).”

Reed’s early success at Robert Morris showed him that the next level of play was within his reach. He had scored at least 20 points in games against Clemson, Duke and North Carolina over the course of the 2014-15 season.

“It went well for me there,” he admitted. “I had a good year, averaging 15 points as a freshman, so I knew I could play at a higher level, which motivated me to transfer. I knew Clemson could get me to that next level.”

Mitchell transferred to Clemson this summer from Vanderbilt, where he had over 100 assists as a freshman. Mitchell is a pass-first point guard with exceptional court vision.

“I decided to come to Clemson because I had a good relationship with Coach (Steve) Smith and the coaching staff even before I went to Vanderbilt.

“I knew I could trust them, and I always liked the coaching staff here.”

When his original plan to play for Wake Forest fell through because of a coaching change, Mitchell ran into trouble with ACC transfer policies and ultimately made the decision to start at Vanderbilt.

Originally from a small suburb outside of Charlotte, Mitchell has found his transition to Clemson to be on the easier side.

“For me, it was easy because I am close to home,” he said. “The campus size is a bit different; Vanderbilt was a lot smaller and was in a big city.

“Once I met the people here, I realized it was much more of a family atmosphere. Everyone really welcomed me in.”

Mitchell’s presence has been welcome in practice as well. He has made quite an impression on his teammates, including star forward Jaron Blossomgame.

“I think Shelton is sometimes our best player in practice,” said Blossomgame, who currently sports team-leading averages at 16.4 points and 6.9 rebounds per game. “He’s an elite point guard and does his job really well. He’s always looking for teammates. He’s an unselfish player.”

Thomas originally chose his university alongside some friends, but decided in December to make a change.

“Originally, I went to Texas A&M with my best friend and two other close friends of mine,” he said. “I wanted to go somewhere that was a better situation for myself, not just for my friends.”

The opportunity to play for the Tigers is one that Thomas could not turn down when making his transfer decision.

“Being able to play in the ACC, not everyone gets that opportunity; the talent level is crazy,” he said.

Reed is positive that Mitchell, Thomas, and himself each bring unique skills to the program.

“With the addition of Shelton, Elijah and myself, we are going to add a lot of tools next year; another good point guard, another good big man, and another good scorer,” Reed said.

However, they also have one very important skill in common.

“Our competitive spirit goes a long way in practice,” Mitchell said. “I think that if even one guy is really competitive and won’t back down, even on the scout team, it makes it harder for the guys who are actually playing.

“The starters don’t want to hear Coach (Brad) Brownell go off about how the scout team guys are beating them.”

Another thing that sets the Tiger scout team apart from others around the country are its vivacious dance moves. When a teammate scores a critical basket, the bench goes insane.

Thomas weighed in, saying that though it may seem like a trivial thing, dancing is the best way they know how to support their teammates when they are on the bench.

“We all have goofy personalities,” Thomas said. “All we can do is stay positive, dance, and cheer them on. The more they see us celebrating after they score, that makes them want to play harder.”

Thomas is convinced that when the three transfers finally take to the court with the players slated to return for 2016-17, it will be electric.

“The scoreboard will definitely be different,” he proclaimed. “We all have weaknesses, of course, but when we mesh with what the team already has, it will be very exciting to watch.”