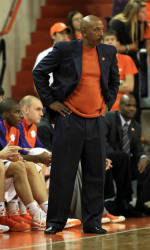 The Clemson men’s basketball team is once again off to a strong start under sixth-year Head Coach Oliver Purnell. The Tigers are listed #4 in the latest RPI calculations by two different services, RealTimeRPI.com and WarrenNolan.com. Clemson, 8-0 on the season, is also fifth according to the latest computer ratings by Jeff Sagarin.

The Tigers have four wins over teams currently in the top 40 of the latest RealTimeRPI.com calculations. Illinois (6-1) is listed 11th, Temple (3-2) is 18th, Hofstra (3-1) is 26th, and Wofford (3-2) is 39th. Five of Clemson’s eight wins have come away from home. The Tigers won three straight to claim the season-opening Charleston Classic trophy and also own a road win over the Charlotte 49ers of the Atlantic-10.

Under Purnell, the Tigers have won their last 26 games in the month of November and have also won eight straight non-conference games on the road. Clemson’s next game will be at home on Sunday, December 7 at 3:00 PM against Liberty.