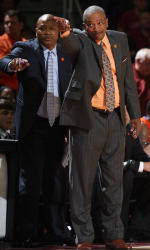 Clemson, SC – The Clemson men’s basketball team earned its highest ranking in over 11 years on Monday when the ESPN/USA Today coaches’ poll was released. The Tigers are ranked #11 by the coaches, the program’s highest ranking in either of the national polls since the 1997-98 team was #5 by the Associated Press on November 16. Also on Monday, the Tigers climbed eight spots to #12 in the latest AP poll.

Clemson is off to a 14-0 start, the third-best record to start a season in school history. The 1986-87 and 2006-07 teams reeled off 17 straight wins to begin both of those seasons. The Tigers are one of just four undefeated teams remaining in the country. Two of the four are from the Atlantic Coast Conference. In fact, four of the top 11 teams in the latest USA Today poll are from the ACC.

This marks the third consecutive season Clemson has been ranked inside the top 15 in at least one of the national polls. In 2006-07, the Tigers were as high as #14 in the January 8 coaches’ poll after consecutive last-second wins over Florida State and Georgia Tech to begin the ACC slate. Last year, Clemson rose to as high as #15 in both polls on December 17 as part of a 10-0 start to the season.

Clemson returns to action on Tuesday to face Alabama out of the Southeastern Conference, the team’s final non-conference game of the season. The contest will tip off at 9:00 PM at Littlejohn Coliseum.