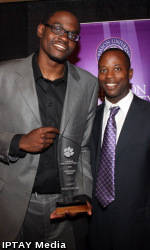 CLEMSON, SC – The Clemson men’s basketball team announced its 2011-12 award winners at the annual year-ending banquet at the school’s Madren Center on Sunday.

Clemson finished the season with a 16-15 overall record, 8-8 in the ACC. It was the fifth straight season the Clemson program finished .500 or better in the regular season of ACC play, a first in school history. Included in Clemson’s 16 wins were three wins at home over NCAA Tournament participants, including Sweet 16 team NC State and ACC Tournament champion Florida State.

Senior roommates Tanner Smith and Andre Young were co-recipients of the Paul Bowie Most Valuable Player Award. Young was an honorable mention All-ACC selection and member of the All-ACC Defensive Team after leading the league in steals per game. He led the Tigers in scoring at 13.3 points per game and was second among all ACC players in assist-to-turnover ratio. Smith was the only player in the ACC to average at least 10 points, five rebounds and four assists per game. He led the Tigers in assists and was second on the team with 11.2 points per game.

Bryan Narcisse was the recipient of the team’s Tiger Pride Award. The award was given to the player that best embodied the total student-athlete – academics, athletics and community service. Narcisse earned his undergraduate degree in communication studies in December of 2011 and was named to the school’s academic honor roll for the fall semester as well.

Bernard Sullivan was the winner of the Tiger Strength Award for 2012. The freshman from Gastonia, NC gained over 15 pounds of lean mass and increased both his bench and squat presses by 25 pounds. He also improved his nutritional habits and put in extra weight training and conditioning sessions during the season.

Smith earned the team’s Academic Excellence Award, given to the player with the top cumulative grade-point average. He was named to the All-ACC Academic Team during the season for the fourth time, joining Shawan Robinson as the only four-time selections from Clemson. Smith earned his undergraduate degree in marketing in December of 2011.

The only non-player award handed out Sunday was the Andy Balliet “Spirit of Clemson” Award. This year’s recipient was administrative assistant Susan Ruark. She completed her 11th season as the personal assistant to the head coach in 2011-12 and was also responsible for the planning of the awards banquet and 100th anniversary alumni reunion celebration in February.