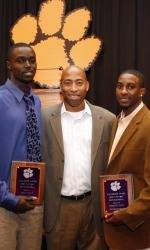 Clemson finished Head Coach Brad Brownell’s first season with a 22-12 overall record, 9-7 in the ACC. The Tigers advanced to the NCAA Tournament for the fourth consecutive year, earning a first-round win over UAB in Dayton, OH. It also marked the fifth straight season Clemson won 20 or more games, a school record.

Senior classmates Jerai Grant and Demontez Stitt were co-recipients of the Paul Bowie Most Valuable Player Award. Stitt was a third-team All-ACC selection at the conclusion of the regular season. He posted back-to-back 20-point games and was named first-team All-ACC Tournament. Stitt, who led the Tigers with 14.5 points per game, is the only player to start on four NCAA Tournament teams in Clemson history. Grant was an All-ACC Defensive Team member after finishing third in the conference with 2.4 blocks per game. He was Clemson’s leading rebounder at 6.7 per game and second-leading scorer with 12.4 points per game.

Zavier Anderson was honored with the Tom Lynch Most Improved Award. He established single-season Clemson record for points, assists and minutes played by an original walk-on. Anderson played 306 minutes in 2010-11 after playing only 44 total in his first three seasons at Clemson. He was placed on scholarship for the spring semester.

Tanner Smith was the recipient of the team’s Tiger Pride Award. The award was given to a player that best embodied the total “student-athlete” – academics, athletics and community service. Smith was an All-ACC Academic Team member for the third straight season and led the team in charges taken with 15.

Catalin “Bobo” Baciu was the winner of the Tiger Strength Award for the second time in his three seasons with the program. Baciu often worked out four times during the season, more than any of his teammates. He has added over 30 pounds to his 7-foot-2 frame over the past two seasons.

Jonah Baize earned the team’s Academic Excellence Award for the second time in the last three seasons. He has over a 3.3 cumulative GPA in sociology and is on track to graduate in May.

The only non-player award handed out Sunday was the Andy Balliet “Spirit of Clemson” Award. This year’s recipient was senior manager Tee Butters of Durham, NC.