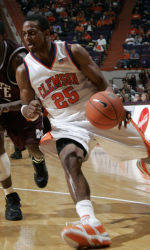 Clemson had a 24-5 overall record when he reached doublefigures in scoring Led the Tigers in scoring at 14 points per game,despite only 10 starts Reached double figures in 18 consecutivegames off the bench, a Clemson record for a reserve in terms ofdouble-figure scoring streaks Hit 88 three-pointers, fourth-most ina single season in school history

Ranked seventh in the ACC in steals per game (1.67) Recordedtwo or more steals in 16 games as a junior Tallied 10 chargestaken, second-best on the team this season Ranks sixth in Clemsonhistory with 159 career steals

Improved his scoring average from 7.1 to 14.0 points per gameas a sophomore Increased his three-point shooting accuracy from33.6 to 39.5 percent Overall field goal shooting improved from 37.7to 46.2 percent Improved his assist-to-turnover ratio from 1.19 to1.48

Led the Tigers in scoring with 14.8 points per game at roadvenues Shot 53.7 percent in Clemson’s 11 away games from his pointguard position Posted 21 points at Duke, N.C. State, and WakeForest; also scored 19 in ACC road opener at Florida State, aClemson victory

Played over 1,200 minutes this season, most on the team;averaged 35.9 minutes per game during the ACC regular season Ranksamong the top 15 in school history in career minutes played (3,123)Strongest player on the team on a pound-for-pound basis

Led the team in minutes played for the third straight seasonOne of five players on the team to average double figures inscoring (11.6) Ranked in the top 10 of the ACC in three-point goalsper game, steals per game, and assist-to-turnover ratio Receivedthree IV bags of fluid following a grueling 37-minute effort atFlorida State, which included the game-winning layup in the finalseconds

Led the team this season in field goal shooting at 60.2 percent(min. 4 made field goals per game) His field goal percentage is thesecond-highest by a freshman in school history Shot 50% or betterfrom the floor in 27 of Clemson’s 36 games Totaled 44 dunks, moston the team

Led the team with a 73.5 percent accuracy (min. 1 made freethrow per game) Hit 82.4 percent of his free throws during the ACCregular season Career 76.3 percent free throw shooter in twoseasons

Tied for the team lead with 6.4 rebounds per game Booker rankedsecond in the ACC in offensive rebounds per game (3.11), while Maysranked eighth (2.72) The duo posted 11 of Clemson’s 14 doublefigure rebound efforts this season Mays collected 10 offensiverebounds at Maryland, tied for third-most in Clemson history for asingle game

Air Force ROTC Aim High Award (Presented to the player who best exhibits the core values of the Air Force, as demonstrated by his integrity, service before self, and excellence in all endeavors)Cliff Hammonds