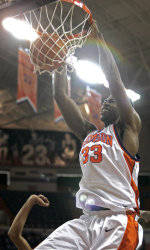 Clemson ended the season with four players averaging in doublefigures, a first by a Tiger team since 2001-02. Shawan Robinson wonthe scoring title with a 12.3 average, while Akin Akingbala wassecond at 12.1 points per game. Vernon Hamilton scored 12.0 andCliff Hammonds averaged 10.1 Vernon Hamilton finished the seasonwith 83 steals, a Clemson single season record. He will enter hissenior year with 201 career steals, already the Clemson singleseason record. His 2.2 average is 11th best in ACC history. AkinAkingbala had 19 points and 13 rebounds in his final game as aTiger. It was his eight double-double in his last 11 games. He hadjust three double-doubles in his first 94 games at Clemson. Heaveraged 15.5 points and 11 rebounds a game over his last eightgames of the season and scored in double figures in 13 of his last14 games. Akingbala might hold the distinction of being the firstplayer in NCAA history to play four years and not score athree-point goal until the final five seconds of his career. Hescored his first career three point goal with 4.6 seconds left inthe Louisville game, his first career made three-point goal. He hadattempted just one in his career prior to that. He is tied for thesecond tallest Clemson player in history to make a three-pointgoal. Horace Grant at 6-10 and one inch taller than Akingbala,scored a three-point goal at Virginia on Valentine’s Day 1987, ashot that gave Clemson a 94-90 overtime victory. Cliff Hammondsneeded 14 points against Louisville to reach a 10 point scoringaverage for the season. Hammonds scored 16 to finish the year witha 10.1 average. He has now scored in double figures in his freshmanand sophomore seasons, the first Tiger to do that since TerrellMcIntyre in 1995-96 and 1996-97. Hammonds has now scored 56 pointsin three NIT games in his career, a 18.6 average. Clemson had 13steals at Louisville and finished the year with a school record 352thefts for the season, 20 more than the 1989-90 Clemson teamrecorded. This year’s team also established the school record on aper game basis with 11.0. The Tigers are third in the nation in thelatest NCAA stats and figure to finish in that position unless someteam makes a great run in the NCAA or NIT. This will be the highestClemson team ranking in any statistical category since the Tigersled the nation in assists per game since 1983-84. Shawan Robinsoncompleted the season with a .913 free throw percentage by hitting84-92 free throws. That .913 figure is the fourth best in ACChistory, trailing just three seasons by J.J. Redick (his firstthree years at Duke). Robinson is currently fifth in the nation infree throw shooting, which figures to be the highest ranking for aClemson player in this category since Jim Sutherland finishedfourth in 1966-67. Robinson also will lead the ACC in free throwshooting, the first Tiger to do that since Sutherland in 1966-67.Robinson concludes his career ranked third in career three-pointgoals (202), sixth in career free throw percentage (.832), andsixth in career three-point goal percentage (.379). He scored 1177career points, 20th in school history. He went ahead of RandyMahaffey in the NIT game at Louisville. Clemson finished the seasonwith 19 victories, its high total since the 1998-99 season whenClemson was 20-15. The Tigers 19-13 final record is the best by aClemson team in terms of winning percentage since the 1996-97 teamfinished with a 23-10 mark. The 19 victories tied for the eighthhighest figure in Clemson history. The 7-9 ACC record was also thebest by a Clemson team since the 1997-98 team finished 7-9.Clemson’s 19th win of the season was over Louisiana Tech in theNIT. It marked the first time in seven years that Clemson won apostseason tournament game. Clemson was in 30 of its 32 games thisyear. The Tigers lost just two games by more than 10 points, atMiami (FL) and at North Carolina. Clemson lost eight points by sixpoints or less. Clemson finished the season with a 74.3 teamscoring average, the highest by a Clemson team since the 1993-94team averaged 75.2 points per game.