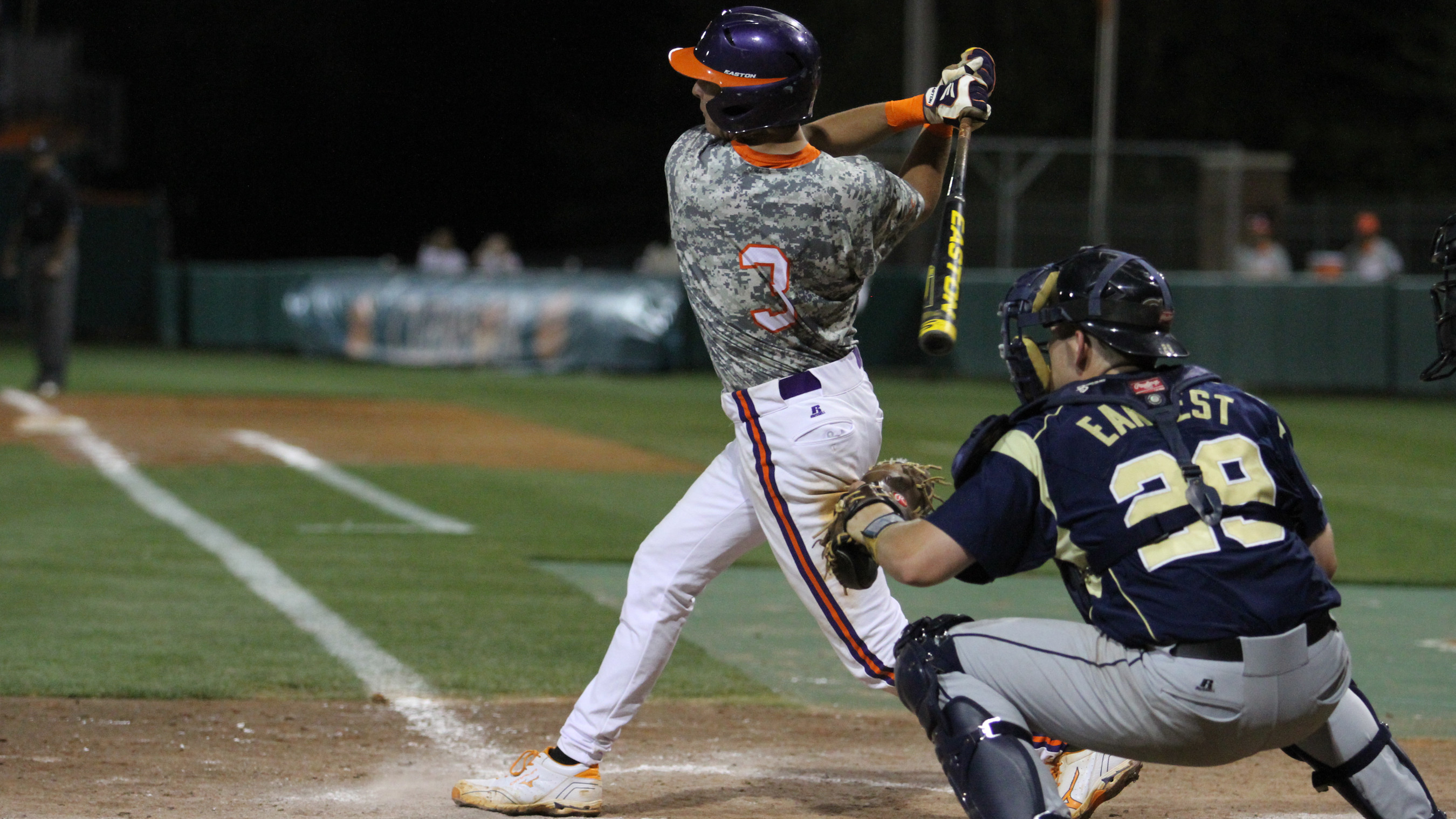 Last Week’s Game Notes & RecapsClemson, ranked as high as #13 in the nation, went 3-1 in four home games this past week. The Tigers trounced Western Carolina 12-1 on Wednesday night before defeating #19 Georgia Tech twice in three games over the weekend.

On the week, the Tigers outscored the opposition 36-21 and batted .327 with a .388 slugging percentage and .463 on-base percentage. They also totaled five doubles, two triples, 38 walks against only 21 strikeouts, and 12 stolen bases. Clemson fielded at a .975 clip as well.

Tyler Krieger led the Tigers at the plate by going 8-for-16 (.500) with five RBIs and five walks against no strikeouts. Jon McGibbon went 6-for-14 (.429) with six RBIs, four walks, and one hit-by-pitch against no strikeouts. Garrett Boulware went 7-for-17 (.412) with six RBIs and six runs, while Maleeke Gibson went 4-for-10 with four RBIs and five runs in his first significant action since mid March.

The Tiger pitching staff had a 2.84 ERA and .294 opponents’ batting average on the week. The staff also allowed 45 hits and 14 walks with 36 strikeouts in 38.0 innings pitched.

Clemson totaled 17 hits in its 12-1 win over Western Carolina at Doug Kingsmore Stadium on April 24. The Tigers scored four runs in the third inning, four runs in the fourth inning, and three runs in the sixth inning to break the game open. Boulware went 3-for-4 with four RBIs and two runs, while Tyler Slaton, Mike Triller, Steven Duggar, Shane Kennedy, and McGibbon all added two hits apiece. Zack Erwin pitched 5.0 strong innings with four strikeouts to earn the win in his first career start.

Clemson then won two of three games over Georgia Tech by a combined score of 24-20 at Doug Kingsmore Stadium on April 26,27. Georgia Tech outhit the Tigers .303 to .284, while Clemson had 30 walks against only 14 strikeouts, a .436 on-base percentage, and nine steals in the series. Krieger went 7-for-12 (.583) with a double, four RBIs, and four walks, while McGibbon went 4-for-10 with five RBIs and four walks. Gibson went 4-for-8 with four RBIs and five runs as well. The Tiger pitching staff had a 3.41 ERA and 27 strikeouts against 11 walks.

In game-one on April 26, which was the first game of a doubleheader, Clemson totaled 13 hits in its 11-3 win over Georgia Tech. The Tigers scored all 11 of their runs in their final four innings at the plate. Clemson totaled eight walks against only four strikeouts. Krieger went 3-for-3 with two RBIs and two walks, while McGibbon went 2-for-3 with three RBIs and two walks. Duggar added two hits, two runs, two walks, and a steal. Daniel Gossett allowed just one run on five hits in 7.0 innings pitched to earn the win.

In game-two on April 26, which was the second game of a doubleheader, Krieger hit a two-out single down the left-field line to score Garrett Boulware in the 11th inning for a 4-3 walkoff win. The Tigers trailed 3-1 before Clemson plated two runs in the ninth inning to tie the score. The Tigers totaled just five hits, but they walked 15 times against only four walks and took advantage of five Georgia Tech errors. Slaton had a game-high four walks, while Boulware and Krieger had two hits apiece. Scott Firth pitched 2.0 scoreless innings in relief to earn the victory.

In game-three on April 27, Georgia Tech scored 10 runs in the fifth inning on its way to a 14-9 win over Clemson. The Tigers scored four runs in the first inning to take a 4-2 lead, but the Yellow Jackets took advantage of two costly Clemson errors to score 10 runs, eight of which were unearned, in the fifth inning. Clemson pulled within 12-9 and had the bases loaded with no outs in the seventh inning, but could not pull any closer. Zane Evans went 6-for-6 with two homers, one double, four RBIs, and four runs to lead Georgia Tech’s 18-hit attack. Gibson went 3-for-5 with four RBIs to pace the Tigers, who had 13 hits.

2013 Season NotesClemson has a 30-14 overall record and 15-9 ACC mark on the season. Despite falling in the series-finale against #19 Georgia Tech on Saturday, the Tigers have still won 14 of their last 17 games. With its win in the second game of the Georgia Tech series, Clemson reached the 30-win mark for the 39th year in a row.

The Tigers, who are averaging 5.3 runs per game, are hitting .276 with a .358 slugging percentage and .353 on-base percentage thanks to 176 walks and 16 hit-by-pitches. The team has totaled 63 doubles, 11 triples, 13 homers, and 71 stolen bases. Clemson has outscored its opposition in each of the nine innings and in extra innings in 2013 as well.

Five different Tigers have at least eight stolen bases, Thomas Brittle (15), Steven Duggar (11), Shane Kennedy (11), Jay Baum (10), and Steve Wilkerson (8). They have combined for 55 of Clemson’s 71 stolen bases in 2013 a year after totaling just 68 stolen bases. The Tigers have used that speed to force ACC opponents to commit 50 errors in 24 league games, good for a .949 fielding percentage.

Senior righty Scott Firth has a 5-4 record and 2.58 ERA in 14 appearances (six starts). In his eight relief appearances since moving to the bullpen, he is 3-0 with three saves and has allowed just 10 hits (.179 opponents’ batting average), one unearned run, and six walks with 10 strikeouts. Sophomore righthander Patrick Andrews has a team-best 2.35 ERA and a .183 opponents’ batting average in 23.0 innings pitched over 13 appearances (one start).

The Tigers will take six days off for final exams before returning to action in a three-game series against Maryland at Doug Kingsmore Stadium starting Saturday afternoon. The Tigers’ last 12 games of the regular season are scheduled during a 15-day span.