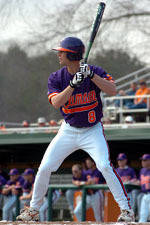 Notes Clemson went 2-1 in three games last week, which included winning two of three games at Wake Forest over the weekend. The Tigers outscored the Demon Deacons 16-12 in the series. The Tigers and South Carolina were scheduled to play on Wednesday night at Doug Kingsmore Stadium, however the game was postponed until later in the month due to the threat of inclement weather.

Clemson won the first and last games of the series at Wake Forest. Clemson did not commit an error in the series, while Tiger pitchers combined for 30 strikeouts against only four walks. Brad Chalk was 5-for-6, Wilson Boyd was 5-for-9, and Ben Paulsen was 5-for-10 to lead the Tigers, who outhit Wake Forest .291 to .277 in the series.

In game-one, Daniel Moskos pitched 6.0 strong innings and five Tigers combined for 12 hits in Clemson’s 6-2 victory at Wake Forest on April 13. Moskos struck out seven and allowed just one run to earn the win. D.J. Mitchell pitched 2.0 hitless and scoreless innings of relief to close out the game. Boyd and Chalk each had three hits, while Taylor Harbin added two hits and three RBIs. Addison Johnson went 2-for-3 with a triple and two runs scored as well. The Tigers’ three-run sixth inning proved to be the difference. Clemson did not commit an error and held Wake Forest to 1-for-13 with runners on base.

In game-two, Brett Linnenkohl’s walkoff single in the ninth inning gave Wake Forest a 6-5 win over Clemson at Hooks Stadium on April 14. Tyler Smith walked to lead off the ninth, went to second on a balk, and scored two batters later on Linnenkohl’s single over the head of Johnson in left field. After the Demon Deacons scored three runs in the fifth inning after the first two batters of frame were retired, Clemson scored four runs in the sixth on two-run doubles by both Doug Hogan and Mitchell. But Evan Ocheltree’s solo homer in the bottom of the sixth tied the score. Mitchell and Chalk led Clemson with two hits apiece, while Linnenkohl had three of Wake Forest’s 10 hits.

In game-three, Clemson escaped with a 5-4 win at Wake Forest on April 15. Wake Forest scored two runs in the ninth inning and had the potential tying run on second base with one out before the game was eventually called due to heavy rain. The two teams waited 90 minutes until the game was finally called, and there was also a 69-minute weather delay at the end of the fourth inning. Andy D’Alessio went 3-for-4 with two doubles and three RBIs as well.

During the week, the Tigers hit .291 with a .362 on-base percentage. Clemson hit eight doubles and a triple, and did not commit an error in 101 chances in the field. The pitching staff had a 4.21 ERA and .277 opponents’ batting average. Ten Tiger pitchers combined to walk just four batters and totaled 30 strikeouts.

Brad Chalk led the way at the plate by going 5-for-6 (.833) in two games. Chalk did not play on Sunday due to a nagging back injury that has kept him from being 100 percent for weeks. D’Alessio returned to the starting lineup during the weekend after missing five games with a groin injury.

Clemson will travel to Columbia, SC to take on South Carolina on Wednesday in the third of four regular-season meetings between the two rivals. The game will mark the Tigers’ seventh consecutive road game. Then over the weekend, Clemson will play host to Virginia beginning Friday night.