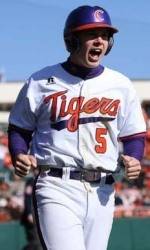 Notes Clemson, ranked as high as #18 in the nation, went 3-2 in five games this past week, which included shutout wins at home over Presbyterian and USC Upstate and one win in three close games at #24 Florida State over the weekend.

Graham Stoneburner, Will Lamb, and Craig Gullickson combined for a five-hit shutout in Clemson’s 8-0 win over Presbyterian at Doug Kingsmore Stadium on March 17. The trio also allowed just one walk and struck out nine batters. Stoneburner pitched 6.0 innings, allowing two hits and one walk with seven strikeouts to earn the win. The Tigers scored three runs in the first inning and never looked back. Ben Paulsen went 3-for-5 with a homer, double, and two runs, while John Nester and Richard Mounce added two RBIs apiece. Mounce drove in his two runs on a pinch-hit single in the eighth inning.

Five Tiger righthanders combined to pitch a no-hitter in Clemson’s 14-0 victory over South Carolina-Upstate at Doug Kingsmore Stadium on March 18. Starter Justin Sarratt pitched 5.0 innings and allowed no walks with two strikeouts to earn the win. Scott Weismann, Kyle Deese, Tomas Cruz, and Matt Vaughn each pitched an inning to close out Clemson’s first no-hitter since 1984. The five pitchers allowed just two baserunners, one in the first inning on an error and one on a walk in the eighth inning. They also combined to face only one batter over the minimum. Mike Freeman went 4-for-5 with a homer, triple, three runs, seven RBIs, a walk, and stolen base to lead Clemson’s 11-hit attack.

Florida State, ranked #24 in the nation, won two of three games over Clemson at Dick Howser Stadium from March 20-22. All three games were decided by three runs or less, as Florida State outscored the Tigers 19-14. The Seminoles outhit Clemson .299 to .248 and had eight steals. The Tigers went just 3-for-33 (.091) with runners in scoring position in the series. Addison Johnson, Kyle Parker, and Jeff Schaus each had four hits apiece. The Tiger pitching staff also totaled 28 strikeouts.

In game-one on March 20, starter Sean Gilmartin struck out eight in 6.1 innings pitched to lead Florida State to a 5-2 win over Clemson. Stuart Tapley’s two-out single in the fifth inning scored the go-ahead run and the Seminoles held the lead for the rest of the game. Only two of the five Florida State runs were earned, as three Tiger errors proved costly. Johnson and Paulsen both hit home runs, but Clemson was 0-for-14 with runners in scoring position and 1-for-19 with runners on base. Schaus had a game-high two hits for the Tigers, who saw their seven-game winning streak end.

In game-two on March 21, Clemson scored three runs in the 11th inning and held on for an 8-7 win over Florida State. The back-and-forth game saw the Tigers hold a 5-3 lead before Tyler Holt hit his second homer of the game to tie the score in the eighth inning. Paulsen’s sacrifice fly and Parker’s two-run homer in the top of the 11th inning gave the Tigers an 8-5 lead. The Seminoles rallied for two runs in the bottom of the 11th inning and had runners at second and third with two outs. But Casey Harman earned his first career save by forcing Rafael Lopez to ground out to second base to end the game.

In game-three on March 22, Florida State scored four runs in the ninth inning, capped by Mike McGee’s walkoff three-run homer, to down Clemson 7-4. Clemson took a 4-3 lead in the eighth inning on Johnson’s suicide squeeze bunt with two strikes that scored Jason Stolz. But pinch-hitter Tommy Oravetz’s leadoff single in the ninth started the Seminole rally. Jason Stidham’s sacrifice fly in foul territory tied the score, then McGee hit an opposite-field homer, his second long ball of the game, with two outs. McGee also pitched 6.0 quality innings in a starting role. Stolz had a team-high two hits and Clemson had 16 baserunners thanks in part to eight walks.

During the week, the Tigers hit .263 with a .397 on-base percentage thanks to 33 walks and six hit-by-pitches in five games. The pitching staff had a 3.15 ERA and .224 opponents’ batting average along with totaling 44 strikeouts in 45.2 innings pitched.

Freeman led Clemson with a .381 batting average (8-for-21) along with five runs, a triple, homer, seven RBIs, five walks, a hit-by-pitch, .519 on-base percentage, and three steals along with not committing an error in 23 chances in the field during the week. Paulsen added two homers and five RBIs. Stoneburner pitched 10.0 innings over two appearances (one start) during the week. The righthander allowed just six hits (.171 opponents’ batting average), two runs (1.80 ERA), and three walks with 11 strikeouts.

The Tigers sport a 14-6 overall record and 5-4 ACC mark on the season, good for second place in the ACC Atlantic Division standings, as Clemson is just percentage points behind first-place Boston College (4-3). Clemson has an 11-2 home record and 3-4 mark away from home. All six of the Tigers’ losses have been by three runs or less.

Clemson is hitting .273 with a .409 slugging percentage and .378 on-base percentage in 20 games. Paulsen is hitting .358 with six doubles, four homers, and 19 RBIs. Freeman is batting .329 with five doubles, three triples, one homer, 14 RBIs, a .469 on-base percentage thanks to 20 walks, and seven stolen bases. Junior outfielder Wilson Boyd has missed each of the last eight games due to injury as well. His status will be re-evaluated on Tuesday.

The pitching staff has a 2.71 ERA and .215 opponents’ batting average on the season. The Tigers have also totaled 178 strikeouts against 58 walks, better than a 3-to-1 strikeout-to-walk ratio. Clemson is fielding at a .966 clip as well.

The Tigers will return home for a two-game, midweek series against Elon before traveling north to take on Boston College in a three-game series over the weekend. 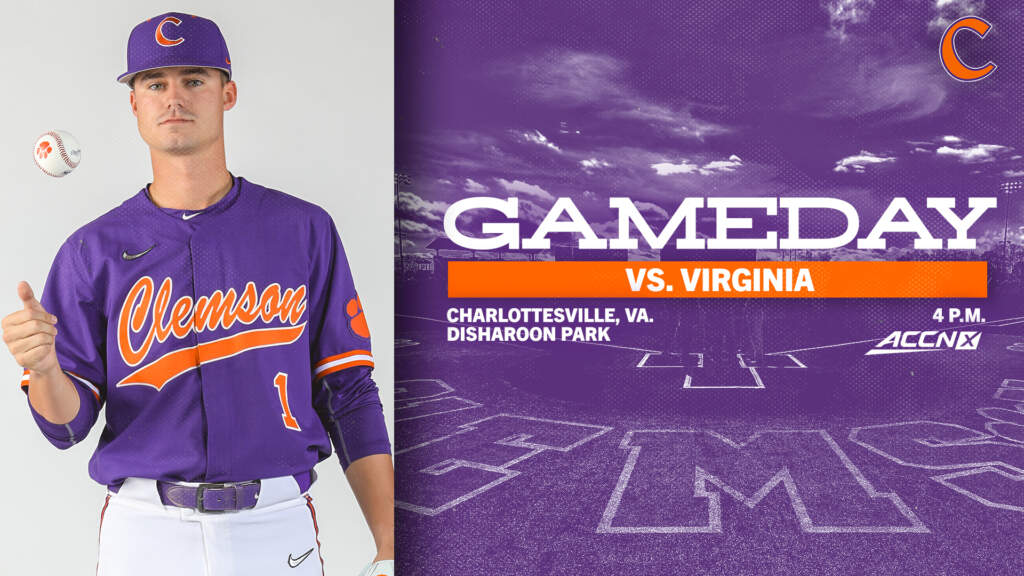