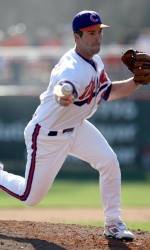 Behind four home runs, #13 Clemson blasted High Point 12-3 on February 27 at Doug Kingsmore Stadium. Ben Paulsen started the scoring with a three-run homer in the first inning. In the seventh inning, Kyle Parker, Wilson Boyd, and John Nester all hit homers in the Tigers’ six-run inning. Paulsen was 2-for-2 with four RBIs and two walks, while Stan Widmann added three of Clemson’s 14 hits. Seven Tigers took the mound, including starter Craig Gullickson, who did not allow an earned run in 3.0 innings pitched to earn his first career victory. The Tigers also turned three double plays.

Clemson hit three homers and scored two runs in the eighth inning to rally past College of Charleston 7-6 at Patriots Point Stadium on February 29. With the Tigers trailing 3-0, Boyd and Doug Hogan hit back-to-back homers to tie the score in the third inning. Paulsen’s solo homer in the sixth inning gave Clemson the lead, but the Cougars scored three runs in the seventh inning to regain the advantage. However, J.D. Burgess’ RBI double and College of Charleston’s subsequent error on the play gave the lead back to the Tigers. Matt Vaughn pitched 2.0 scoreless innings with three strikeouts to record the save. Hogan, Paulsen, and Parker each had three hits to lead Clemson’s 13-hit attack, which included seven extra-base hits.

South Carolina, ranked #3 in the country, won both games of a home-and-home series over Clemson on March 1,2. The Gamecocks outscored the Tigers by a combined score of 15-2 and outhit Clemson .329 to .250. South Carolina turned four Tiger errors into seven unearned runs. Alex Lee was 4-for-5 in the two games, while Boyd added four hits in eight at-bats. The two Clemson starting pitchers combined to allow just two earned runs in 11.1 innings pitched as well.

Reese Havens hit a grand slam and totaled five RBIs to lead South Carolina to a 10-1 victory over Clemson at Sarge Frye Field on March 1. Havens’ two-out grand slam in the second inning came after a costly error, one of two by the Tigers that led to six unearned runs in the game. Clemson totaled eight hits but could not string them together, as it left nine runners on base to the Gamecocks’ four. Burgess’ double in the seventh inning plated Lee for the Tigers’ lone run. Lee also went 2-for-2 with a walk. Mike Cisco pitched 7.1 strong innings to earn the win. Ryan Hinson suffered the loss even though he allowed just six hits, one earned run, and no walks with five strikeouts in 6.0 innings pitched.

Blake Cooper and Curtis Johnson combined to limit Clemson to one unearned run on nine hits in South Carolina’s 5-1 win over Clemson at Doug Kingsmore Stadium on March 2. The Gamecocks scored two runs in the top of the sixth inning before the Tigers cut their lead in half in the bottom of the sixth inning on a South Carolina error. But the Gamecocks added a run in the seventh inning and two more in the ninth inning to cap the victory. Five Gamecocks had at least two hits, as they totaled 14 in the game. Boyd had three of the Tigers’ nine hits, but Clemson was 1-for-18 with runners on base and 0-for-7 with runners in scoring position.

On the week, the Tigers hit .306 to their opponents’ .308 batting average. The team also had a .521 slugging percentage thanks to 10 doubles and seven home runs, including two each by Paulsen and Boyd. Paulsen was 7-for-13 (.538) with a double, two homers, and five RBIs in four games. The pitching staff had a 3.60 ERA, but the Tigers allowed 10 unearned runs during the week thanks to eight errors in four games. However, the pitchers combined for 29 strikeouts against only five walks on the week.

The Tigers, who are 5-2 overall, are hitting .324 with a .551 slugging percentage and .395 on-base percentage. The team has also totaled 15 doubles and 13 home runs in seven games. Boyd is hitting a team-best .414 with five homers and 11 RBIs, both team-highs. Hogan is hitting .393 with two homers and five RBIs, as he is riding a current 22-game hitting streak, tied for the sixth-longest streak in school history.

The pitching staff has a 3.77 ERA and .279 opponents’ batting average on the season. Hinson (2.45 ERA), Graham Stoneburner (2.70 ERA), and D.J. Mitchell (3.48 ERA) all have solid ERAs. Vaughn, who has nine strikeouts against no walks in 5.0 innings pitched over four relief appearances, has both of Clemson’s saves. The team is fielding at a .966 clip as well.

Outfielder Addison Johnson, slated to be the team’s leadoff batter, has yet to play in a game, as he is nursing a hamstring injury. Second-baseman Mike Freeman (5) and third-baseman John Hinson (4) have also missed recent games due to injury.

The Tigers will play host to Wofford on Wednesday afternoon before playing its ACC series-opener at Wake Forest over the weekend.